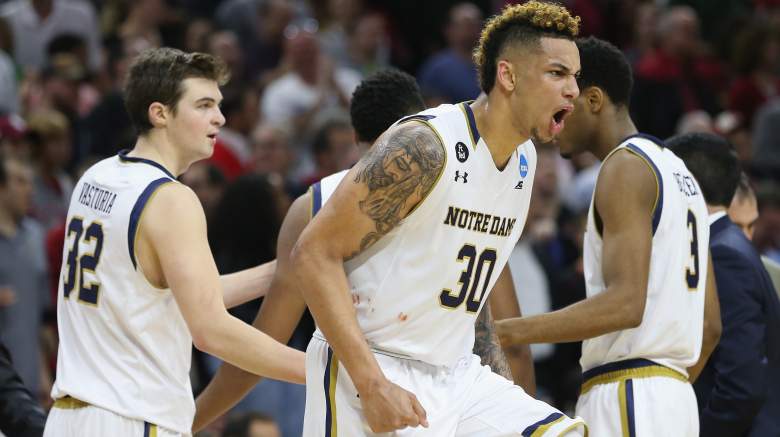 Notre Dame’s last-minute heroics continued against Wisconsin, and now the Irish will play for a spot in the Final Four. (Getty)

For the third time this season, it’s North Carolina vs. Notre Dame. This time, though, there’s a spot in the Final Four on the line.

Here’s everything you need to know to watch Sunday’s Elite Eight matchup:

Marcus Paige is finding his rhythm at the right time.

A National Player of the Year contender when the season started, the senior guard has struggled with his shot for most of the year, hitting on a career-low 33.0 percent of his threes. But he’s been heating up this tournament, and he fully caught fire against Indiana, knocking down 6 of 9 from beyond the arc for 21 points to go with six assists and zero turnovers to fuel UNC’s 101-point effort against the Hoosiers.

When Paige is playing like that, the Heels–clearly–are really difficult to beat because they also have arguably the best frontcourt in the country. When Paige is stretching the defense, Brice Johnson and Kennedy Meeks have room to operate inside, while Justin Jackson and Joel Berry get space on the perimeter.

Add in Carolina’s improving defense, and it’s a tall task for the Irish, who lost to North Carolina by 31 just a couple weeks ago.

Mike Brey has an array of offensive weapons. Zach Auguste and Demetrius Jackson make for a nice inside-outside combo, VJ Beachem is deadly from outside and sophomore Matt Farrell has provided a nice boost as of late.

But if Notre Dame is going to pull an upset, it’ll have to be its defense–which is ranked just 155th in adjusted efficiency–that steps up against UNC’s explosive attack.