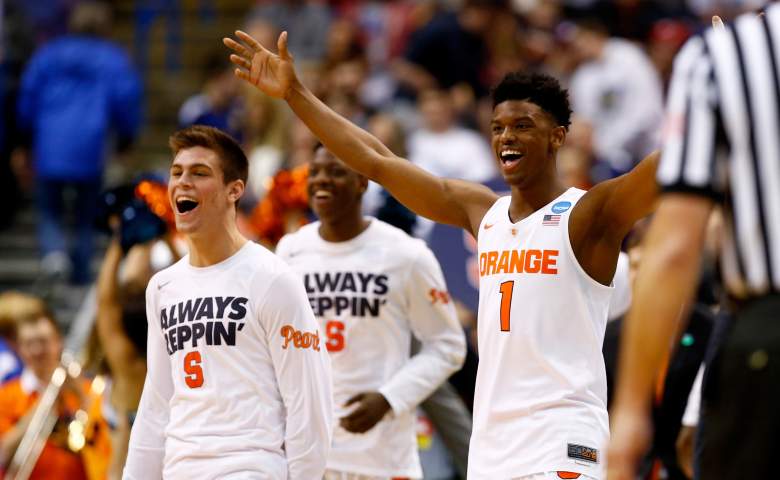 Syracuse has been playing well as the underdog, but Virginia is a brand-new kind of foe. (Getty)

Syracuse wasn’t supposed to be here. The Orange weren’t even supposed to make the NCAA Tournament, let alone make the Elite Eight. But, here we are.

That is, after all, why they play the game.

Now, however, Syracuse finds itself facing off against a familiar opponent on Sunday evening, taking on league foe Virginia with a trip to the Final Four on the line. IN other words, this one is going to be good.

So, what are the chances that the Orange keep dancing? Read on for a complete breakdown of the odds outlook for the game, via OddsShark:

The Orange may be the surprise team (or at least one of them) in the Elite Eight this year, but they’ve also been pretty darn good when it comes to betting.

Syracuse is 6-1 ATS in its last seven while 3-1 ATS as underdogs in that span and, well, let’s just say that Syracuse is an underdog in this one.

Virginia, meanwhile, is 3-0 SU and 2-1 ATS against the Orange since the start of 2014. Of course, the Cavaliers have also been pretty impressive throughout the Tournament as well. UVA has posted a scoring margin of +19 points throughout the Tournament, while Anthony Gill has quietly posted some of the most impressive number sin March. The senior has averaged 20.3 points and 7.7 rebounds while shooting over 70 percent during the tournament.

Another reason to like Virginia? Malcolm Brogdon. The ACC Player of the Year had 21 point, five rebounds and three assists against Syracuse earlier this year.