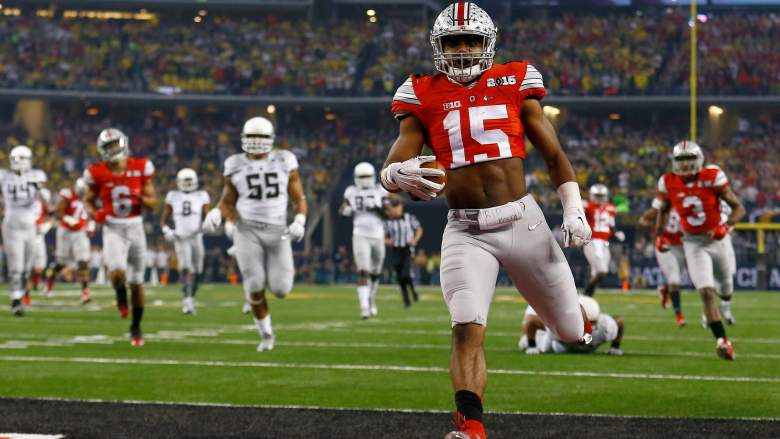 Ezekiel Elliott is a wanted man.

With size, speed, vision and rare pass-blocking ability, the Ohio State product is one of the most well-rounded running backs to come out of the draft in years. As such, he has garnered comparisons to Adrian Peterson and Ladainian Tomlinson, to name a few.

Teams tend to be wary of using first-round picks on running backs these days–just five in the last four years–but Elliott is a generational talent. And it would appear he’s not going to make it out of the Top 10, let alone the first round.

The first potential landing spot would be the Dallas Cowboys at No. 4. They signed Alfred Morris in the offseason, but neither he nor Darren McFadden are the future, and putting Elliott behind that bulldozing offensive line is undeniably alluring.

A couple years ago DeMarco Murray carried the football 449 times, had 2,200 yards, and this kid Ezekiel Elliott I think is a better football player. You plug him in there behind an offensive line that’s in their prime, and you take a ton of pressure off a 36-year-old Tony Romo.

Per NFL scout Greg Gabriel, teams around the league are under the same assumption:

The feeling around the league is Cowboys will select Elliott. The HC is pushing hard for that pick

The next likely spot is No. 8. The Cleveland Browns, who have an inconsistent Isaiah Crowell and a change-of-pace/receiving back in Duke Johnson, could use someone like Elliott in an offense that is devoid of playmakers, but there are also rumors that they’d be willing to trade back with a team who wants him at their spot:

McManamon: I think the #Browns would really consider Ezekiel Elliott at #8 and if he's not there, they would trade back.

Trade spot to watch: #Browns at No. 8. They've been having discussions with teams behind them who would want to come up for Ezekiel Elliott

Another popular spot for Elliott is No. 13 to the Miami Dolphins, who have Jay Ajayi but may be seeking a better replacement for Lamar Miller. NFL.com’s Daniel Jeremiah, CBS Sports’ Pete Prisco and Sports Illustrated‘s Greg Bedard all have Elliott going to Miami, although Jeremiah notes the Dolphins may have to move up to get him.

No matter what happens, one thing is obvious. This transcendent talent won’t be waiting long to hear his name called on Thursday night.