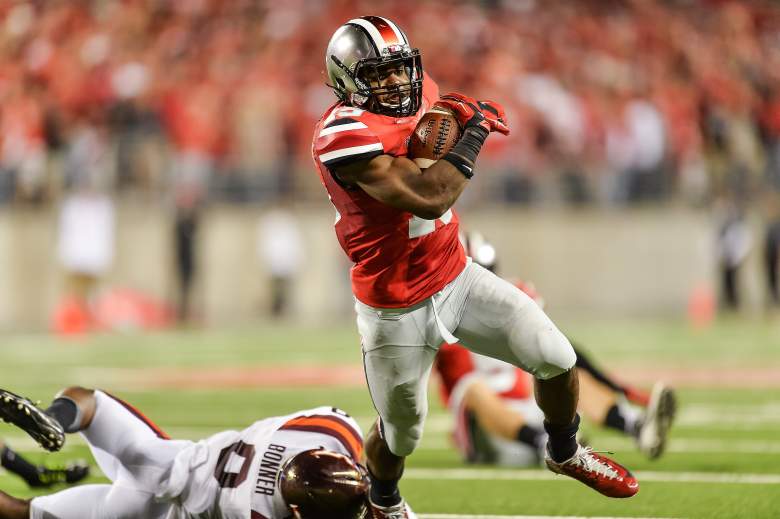 Ezekiel Elliott is prepared to make an immediate impact in the NFL. (Getty)

Ezekiel Elliott has all the tools to play in the NFL and immediately contribute. The question fantasy football fans want to know is what his fantasy impact will be.

Todd Gurley and Melvin Gordon represent the possible fantasy paths of rookie running backs. Gurley missed the beginning of the season as he continued to rehab from injury, but entered the NFL by storm becoming one of the best fantasy running backs last season. In 13 games, he rushed for 1,106 yards and 10 touchdowns.

Despite looking like a polished running back coming out of Wisconsin, Gordon struggled his rookie season. He rushed for just 641 yards and failed to score a touchdown his rookie season. Whether Gordon’s struggles should be attributed to a poor offensive line or his own deficiencies remains to be seen, but this presents the challenge for fantasy owners who look to draft a rookie back.

The good news for Elliott is he is great in pass protection. The reason many rookie backs fail to stay on the field is their inability to pass block. If all goes as planned, Elliott is prepared to stay in the game on passing downs which will lead to more opportunities for fantasy points.

Elliott’s value skyrocketed when he was selected by the Dallas Cowboys. He will have the opportunity to run behind one of the best offensive lines in football. Expect the Cowboys to go away from the running-back-by-committee approach and use Elliott as their feature back.

Elliott rushed for 1,821 yards, 23 touchdowns and averaged 6.3 yards per carry at Ohio State. He has the quickness to slip through the narrow holes of the NFL as well as solid top end speed. In fantasy drafts, expect him to go in a similar range as Melvin Gordon did last season. This means he will begin getting looks in the third round of drafts in 12-team leagues.

While there is a risk in drafting Elliott, we think the potential benefit outweighs the cost. While he is not quite the player as Gurley, we can see him rushing for over 1,000 yards and 8 touchdowns his rookie season. Don’t reach for him but pull the trigger if the price is right, especially in keeper leagues.

Here’s a look at his monster performance against Michigan last season: