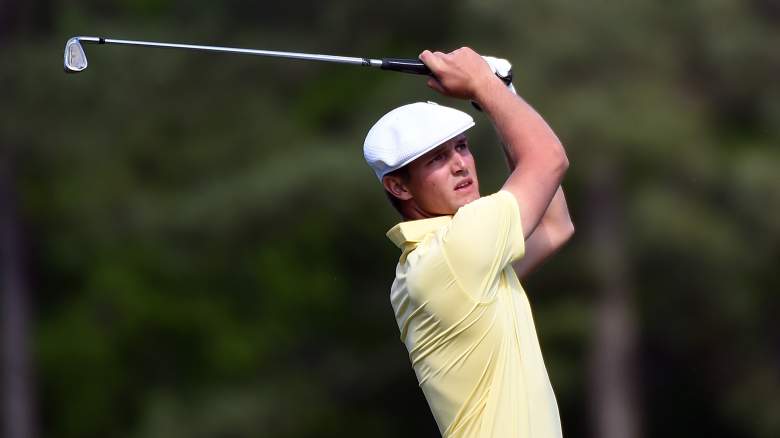 Bryson DeChambeau is making noise at the 2016 Masters. Getty)

Bryson DeChambeau appears to be what every parent wants in a child — smart, polite, well-spoken, athletic.

With his quirky mannerisms and his big-time play on the course, DeChambeau is making quite a name for himself at the 2016 Masters as he’s just a few shots off the lead heading into the weekend.

Did we mention he’s still an amateur?

His parents are Jon and Jan DeChambeau and they’ve known their son has been a phenom since he was a child. Now the rest of he world is starting to see it.

Here’s what you need to know about the DeChambeaus:

Jon was a standout golfer in his own right. In fact, he played in few PGA Tour events between 1987 and 1991.

He was regarded as one of the top amateurs in California when growing up in the 1970s and 80s.

Jon played golf for the University of Arizona, where he attended from 1979 to 1982. He graduated with a degree in business.

2. Jon Works In the Golf Business

Out of college, Jon took a couple of jobs as an assistant golf pro.

First at the Skyline Country Club in Tucson, Arizona, then he moved on to Tucson National Golf Club until 1987.

After that Jon did a stint as a manager for a chain golf store out West before playing professionally.

After his pro playing days were over, Jon got into business, working in sales and operations for a golf club and then for the Fresno minor league baseball team.

Currently, he works as a Regional Manager of Northern California for Verishot, a golf social media company

3. Jan Works as a Sales Rep

If you’ve seen an interview with Bryson, you’ll see he has the natural gift of gab.

And he most likely inherited that from his parents. His father Jon works for a social media company and his mother, Jan, is in sales.

Jan works as a sales representative for Serta, the mattress company.

The DeChambeaus live in Clovis, California, which is close to Fresno. They have two sons, with Bryson being the younger.

The boys attended Clovis East High School. Bryson then went to play at SMU, where he won the 2015 NCAA Championship and the U.S. Amateur.

This excerpt is from a Golf Digest article from September 2015, as Jan describes Bryson:

Jan describes the younger of her two boys as an unusually focused child, fastidious about a lot of things, including his neat-as-a-pin room (although, she says, sadly, that’s changed). At around 6, he could add large sums in his head and showed a precocious understanding of basic algebra. And he was a jock, playing baseball, soccer and basketball very well before golf took over.

Jon has been battling kidney and pancreas diseases, and as of six months ago was awaiting transplants.

But if you listen to his wife, you know he isn’t a quitter. Nor is Bryson.

Jan said about Bryson and Jon to Golf Digest:

I think it’s stubbornness. He’s steadfast. Once something is proved to him, he stands his ground. He gets that from his father. That old Dutch streak.

Read More
Golf, Masters 2016, PGA Tour
Jon and Jan DeChambeau are the parents of golfer Bryson DeChambeau, who is making a name for himself at the Masters. Learn more about them here.