Almost a year ago today the world was introduced to Annie Verret.

Verret’s boyfriend is PGA Tour star Jordan Spieth. Spieth, just 21 at the time, had just pulled off an unforgettable feat — a wire-to-wire victory at the Masters, golf’s most famous tournament. The CBS cameras followed Spieth’s celebration; hugs from his caddie, Michael Greller, and his parents and brother. Then Spieth came up to a cute brunette and the two shared a kiss which was caught by the cameras. Then the internet nearly broke. Everyone wanted to know who the girl was. It was Annie Verret. 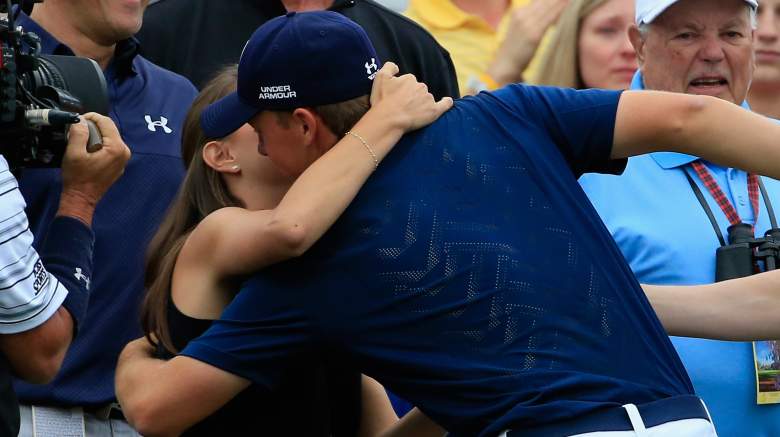 Jordan Spieth gets a kiss from girlfriend Annie Verret after winning the 2015 Masters. (Getty)

Jordan and Annie immediately became golf’s new “it” couple. Spieth’s career took off as his game continued to improve as he won golf’s second major, the U.S. Open, in June. This time, though, Annie Verret wasn’t there for the celebration. Or if she was, she stayed out of the camera’s eye. In fact, that’s been the case ever since Spieth won the 2015 Masters.

So where is Annie Verret?

She keeps busy with her job as an Event Coordinator with the First Tee of Greater Dallas. She’s been doing that since January 2015. And, as most of us know, you can’t just pick up and travel around the country at will when you have a job.

But Spieth and Verret, both 22, have also kept their relationship rather private since his meteoric rise into golf greatness. It’s rare to see a photo of the two together on Twitter or Instagram compared to last year at this time.

The two did snap a photo together, along with Spieth’s parents and sister, back in January 2016 as they traveled back to the continental U.S. after a tournament in Hawaii. And by the way, Spieth won that tournament, the Hyundai Tournament of Champions, by 8 strokes.

But that’s the last time Spieth and Verret have been pictured together — well, publicly on social media, at least. Why? There’s no indication they broke up. Perhaps they are just focusing on their careers. And maybe they just want to stay out of the spotlight.

Whether Verret is at Augusta National right now is unknown. And if she isn’t, it’s also unknown if she’ll be coming for the weekend. But judging by Spieth’s first round and history, if Verret arrives in Georgia, there’s a very good chance she’ll be watching her boyfriend playing meaningful golf on Sunday.