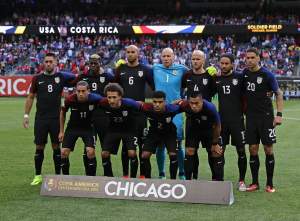 The United States enter their last match of group play tonight in Copa America 2016. Advancement scenarios can be a bit confusing, and Heavy is here to help.

The simplest answer is, if you are a US soccer fan, you are rooting for the United States not to lose. A loss would eliminate the USMNT from advancing. While a tie against Paraguay does not guarantee the USA will advance, it is the closest you can come to a “non-guaranteed” guarantee.

Costa Rica would need to beat Columbia in the match after the United States and make up the six goal differential that separates the teams.

Best case scenario for the United States? They defeat Paraguay and Costa Rica beats Colombia by two goals. The best the USA can do is tie Colombia in points and the tiebreaker goes to goal differential. Colombia has a one goal lead on the United States.

To summarize, a win automatically sends the United States through. A tie likely does as well unless Costa Rica plays out of this world. A loss would end the USA’s Copa America run.