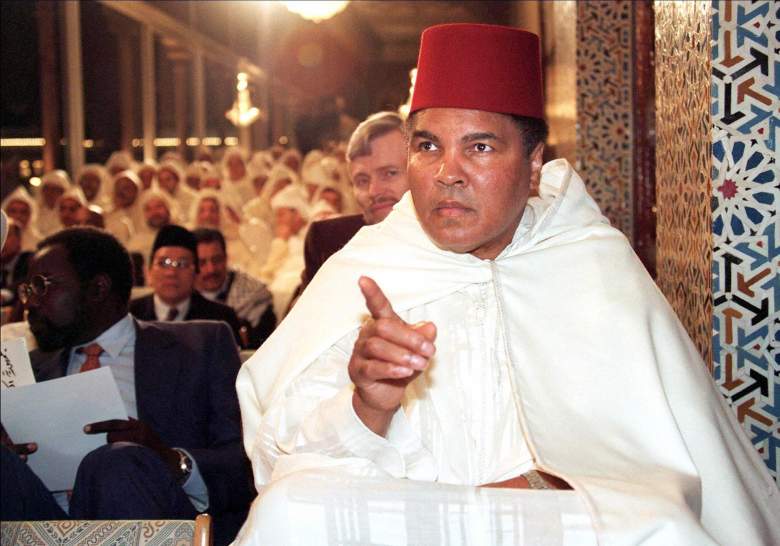 Muhammad Ali converted to Islam in the early 1960s. He converted to two other sects within the Muslim religion over the course of his life.

Muhammad Ali sacrificed three years of his career and risked imprisonment for his faith. He refused to serve in the Vietnam War, referring to himself as a “conscientious objector,” and was arrested. Ali considered his Christian upbringing empty and sought out a new spiritual home, which he found in the Nation of Islam.

The three-time heavyweight boxing champion, who passed away on June 3 at age 74, spent 15 years as a Black Muslim (as the Nation’s members were often called) before converting to Sunni Islam. In his later years, Ali embraced Universal Sufism also known as Sufi Order Ināyati.

1. Ali’s Mother Raised Him as a Baptist 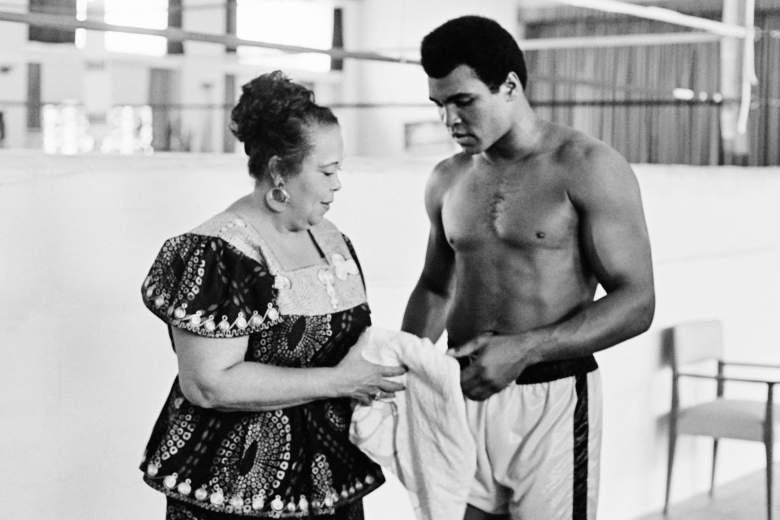 Muhammad Ali’s mother was his greatest supporter despite their separate spiritual paths. (Getty)

Ali’s father, Cassius Clay Sr., was a Methodist, but he allowed his wife, Odessa O’Grady Clay, a devout Christian, raised their sons Cassius Jr. (Ali) and Rudolph “Rudy,” as Baptist. Even after Ali converted to Islam, he still held onto his belief in God, just by another name, like his mother taught him.

In an excerpt from the Ali biography, Muhammad Ali: His Life and Times, the boxer is quoted as saying:

My mother is a Baptist, and when I was growing up, she taught me all she knew about God. Every Sunday, she dressed me up, took me and my brother to church, and taught us the way she thought was right. She taught us to love people and treat everybody with kindness. She taught us it was wrong to be prejudiced or hate. I’ve changed my religion and some of my beliefs since then, but her God is still God; I just call him by a different name.

2. Ali Kept His Affiliation with the Nation of Islam Secret for 3 Years

Ali first came into contact with the Nation of Islam (NOI) in 1959 while in Chicago for a Golden Gloves tournament, and attended his first meeting in 1961. The next year, his friend Sam Saxon introduced him to Malcolm X. Ali and Malcolm X became good friends and Malcolm was ringside when Ali defeated Sonny Liston in 1964 to become the world heavyweight champion.

The fighter kept his affiliation with the NOI a secret for three years, but revealed his membership soon after his match with Liston. Ali said at the time (via Vice):

Well I figured they would pressure me if I revealed it so I kept it quiet for about three years. I sneaked into meetings, sneak in the back door, look around for the police officer, pass me in, before going in. But after beating Sonny Liston, after getting more regulation and my power finally is straight, I said, I don’t know, I told them that night I fought Liston and revealed it after that fight.

At first, Ali dropped his last name, Clay (his slave name since most African-Americans received their surnames from their former slave masters), and went by the name Cassius X. The Nation’s founder, Elijah Muhammad, gave him the name Muhammad Ali.

As Ali went public with his NOI affiliation, Malcolm split off from the group after Elijah Muhammad forbade the Civil Rights leader from speaking publicly. It also ended Ali and Malcolm’s friendship when Ali decided to stay loyal to Muhammad.

The end of his friendship with Malcolm because one of Ali’s greatest regrets in life, wrote Randy Roberts, the co-author of Blood Brothers: The Fatal Friendship Between Muhammad Ali and Malcolm X.

One of Ali’s greatest regrets — and he said as much — is that he never patched things up with Malcolm, that he never told Malcolm how important he was to him.

3. He Objected to the U.S. Draft; He Would Not Take Part in ‘Christian Wars’

In 1966, the U.S. Army revised its 1-A classification, which made Ali qualified for the draft. On April 28, 1967, the day of his scheduled induction, Ali refused to step forward when his name was called despite penalty of five years in prison and a $10,000 fine.

Ali took the stance of a “conscientious objector” as a black Muslim and ultimately was arrested then convicted. He stayed out of prison while he appealed his case, which went all the way to the U.S. Supreme Court. Ali explained his reasoning at the time saying:

The New York boxing commission suspended Ali’s license the same day he was arrested and stripped him of his heavyweight title. Other boxing commissions did the same, and Ali didn’t fight again until 1970. The next year, his conviction was vacated by the Supreme Court.

4. He Converted to Sunni Islam Following the Death of Elijah Muhammad 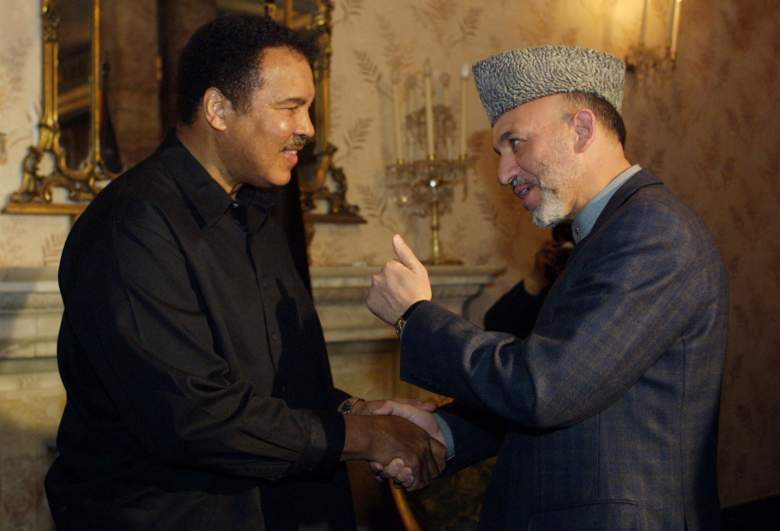 In November 2002, Ali met with Afghan President Hamid Karzai in Kabul on a three-day mission as a “Messenger of Peace” for the United Nations. (Getty)

Like Malcolm X before him, Ali left the Nation and embraced the more mainstream Sunni Islam in 1975 following the death of Elijah Muhammad. In 1990, he met with Saddam Hussein to help broker the release of Americans held captive after the invasion of Kuwait. In 2011, he asked Iran to release the U.S. hikers captured.

He also spoke out against the Islamic extremists who carried out the terrorist attacks on September 11, 2001. The same day, he had an interview scheduled with Reader’s Digest conducted by Howard Bingham, his former public relations manager. Bingham asked Ali his reaction to the attacks:

Killing like that can never be justified. It’s unbelievable. I could never support hurting innocent men, women and children. Islam is a religion of peace. It does not promote terrorism or killing people…

Most recently, Ali spoke out against Republican presidential candidate Donald Trump’s proposed ban against Muslim in the U.S. He released this statement, titled “Presidential Candidates Proposing to Ban Muslim Immigration to the United States,” in December.

I am a Muslim and there is nothing Islamic about killing innocent people in Paris, San Bernardino, or anywhere else in the world. True Muslims know that the ruthless violence of so called Islamic Jihadists goes against the very tenets of our religion.

We as Muslims have to stand up to those who use Islam to advance their own personal agenda. They have alienated many from learning about Islam. True Muslims know or should know that it goes against our religion to try and force Islam on anybody.

Speaking as someone who has never been accused of political correctness, I believe that our political leaders should use their position to bring understanding about the religion of Islam and clarify that these misguided murderers have perverted people’s views on what Islam really is. 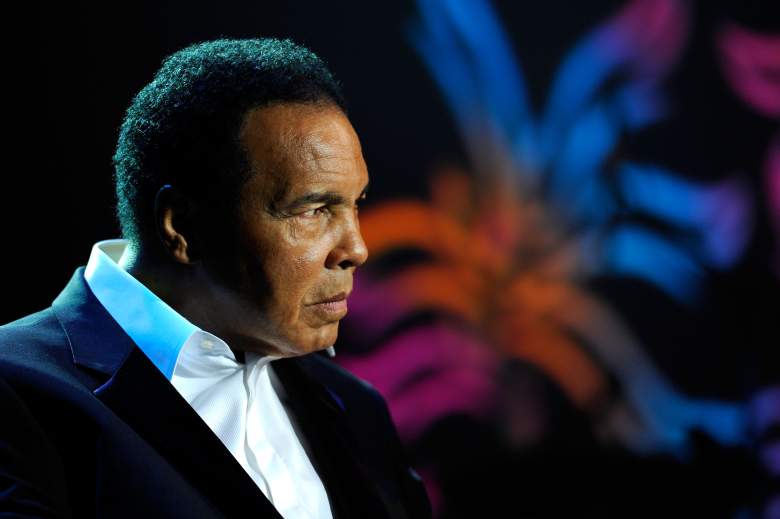 Khan was an Indian-born musician and Sufi master who lived from 1882 to 1927, according to the International Sufi Movement. Sufism means wisdom, both from within and without, and is not classified as a religion.

In his later life, Ali continued to try and convert others to Islam, but he spent more time doing charity work, his daughter Hana said.

It was important for him to be very religious and take the stands he did in earlier years. It was a different time. He still tries to convert people to Islam, but it’s not the same. His health and his spirituality have changed, and it’s not so much about being religious, but about going out and making people happy, doing charity, and supporting people and causes.