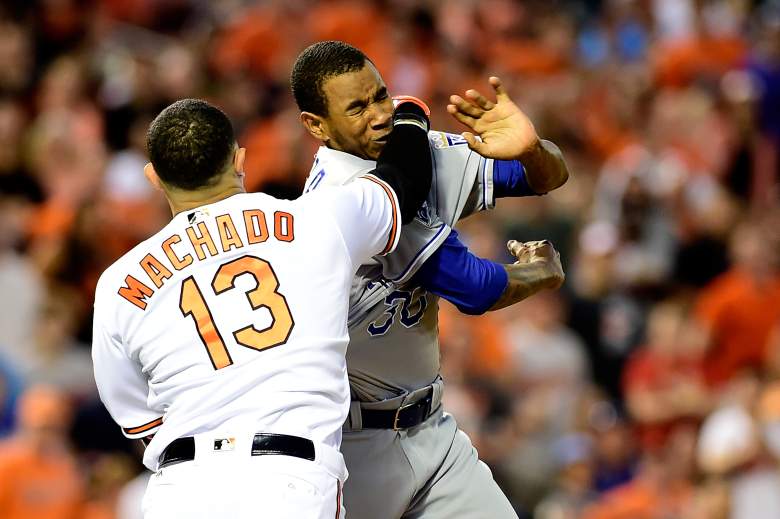 Machado charged the mound after being hit by Yordano Ventura. (Getty)

Two nights ago, Manny Machado was hit by a 99-mph fastball from Yordano Ventura, who he had been jawing at in the second inning. Incensed, he charged the mound and started a benches-clearing brawl between the teams. Many blamed Ventura, thinking he threw intentionally, but Machado being the first to strike, has now been suspended and fined, according to Bob Nightengale of USA Today.

Machado will be suspended for 4 games and fined $2,500 for his transgressions, though Nightengale reports that the likely course of action is for Machado to appeal MLB’s decision. Though two nights ago Adam Jones talked about being okay with Machado’s decision insinuated to reporters that Machado needn’t worry about a possible fine.

Jones: "Hopefully the league catches on to it. I've got Manny's fine and the rest is history."

No news of any punishments for Ventura have been announced as of yet. This was not the first brawl started by a Ventura hit by pitch, nor was it the first time Ventura had hit Machado in his career. This would be Machado’s second suspension in his young career – in 2014 he was suspended five games for throwing his bat near third base.

Should the suspension hold, the Orioles would be without a star player. Hitting over .300 with 15 home runs so far, Machado is also the current leader in votes for the All-Star Game amongst AL third basemen.

This is the second intense fight in baseball we’ve seen in 2016, even if Machado’s hit didn’t land quite as hard a Roughned Odor’s did on Jose Bautista.