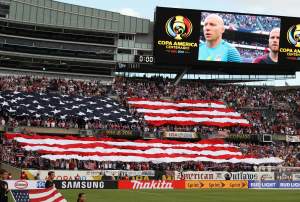 The United States have advanced to the Copa America quaterfinals after defeating Paraguay 1-0. A first half goal by Clint Dempsey would end up being the only goal of the match.

DeAndre Yedlin will miss the next match after receiving two yellow cards within a minute of each other to earn a red card.

The USA would win Group A if Costa Rica defeats Colombia. They will either play the winner or runner-up of Group B.

Here’s how the USA came up with the victory.

DeAndre Yedlin Got Two Yellow Cards in One Minute

Yedlin receives two yellow cards in a span of a minute, resulting in a red card and is sent off. #USAvPAR, 1-0, 48'

At the start of the second half, Yedlin received two yellow cards within one minute of each other. The second play was extremely aggressive given he had just received a prior yellow. Yedlin received a red card and the United States were down to 10 men.

Clint Dempsey Got USA on the Board Early

After sailing a free kick over the net minutes earlier, Dempsey scored at the middle of the field. The United States went up 1-0 around the 27′.