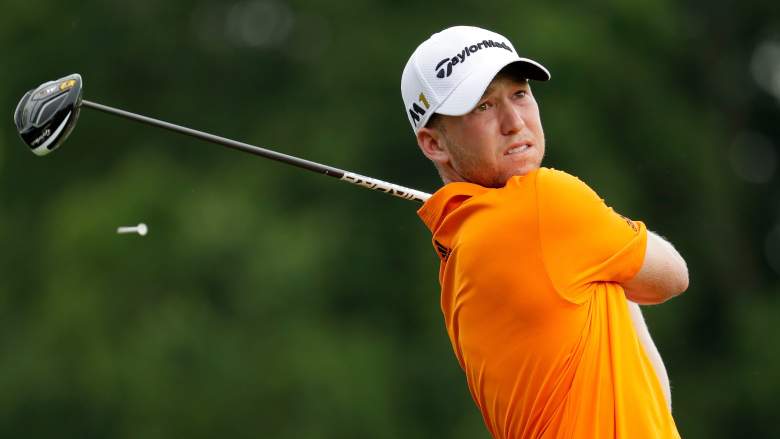 MEMPHIS, TN – JUNE 12: Daniel Berger hits off the second tee during the final round of the FedEx St. Jude Classic at TPC Southwind on June 12, 2016 in Memphis, Tennessee. (Photo by Andy Lyons/Getty Images)

Last year’s Rookie of the Year captured his first TOUR victory on Sunday, shaking off a potentially rhythm-disrupting rain delay at the St. Jude Classic to shoot a 67 and finish the tournament at 13-under, three strokes ahead of Phil Mickelson, Brooks Koepka and Steve Stricker.

Here’s the Top 10 from TPC Southwind:

You can click here for the full leaderboard, and you can read on for highlights from Sunday’s action:

With birdies on No. 3, 4 and 7, Brooks Koepka pulled into a tie atop the leaderboard with Daniel Berger, who entered the round with a three-shot lead. The best of the bunch was on No. 4, where he drained a 32-foot putt:

Brooks Koepka rolls in a 32-foot birdie putt at FedEx St. JudeIn the final round of the 2016 FedEx St. Jude Classic, Brooks Koepka’s birdie putt finds the hole from 32 feet on the par-3 4th hole. . SUBSCRIBE to PGA TOUR now: http://pgat.us/vBxcZSh Welcome to the official YouTube channel of the PGA TOUR. Here you can find everything you need to stay up to date with the world’s foremost golf tour.. Check in for highlights from every tournament plus player interviews, player profiles, tournament previews, swing analysis and all the greatest shots and amazing moments. Teryn Schaefer presents the best social media posts from around the world of golf in ‘Trending on TOUR' and after each day's play brings you the biggest talking points in 'The Takeaway'. Check out https://www.pgatour.com for complete coverage along with all the latest news, scoring, and stats! Follow PGA TOUR online: Instagram: https://instagram.com/pgatour/ Facebook: https://www.facebook.com/PGATour Twitter: https://twitter.com/PGATOUR SoundCloud: https://soundcloud.com/pgatour Sign up for exclusive coverage – http://www.pgatourlive.com PGA TOUR Superstore – http://www.pgatoursuperstore.com/2016-06-12T21:24:55.000Z

Dustin Johnson, who began the day eight strokes behind the lead after a three-over 73, caught fire on the back nine with three birdies and an eagle on a seven-hole stretch to climb within a shot of the lead:

With three players within a stroke, Berger, who bogeyed No. 1, hit a big-time birdie putt on the sixth green to push his lead back to two:

The lead is again 2. #QuickHits https://t.co/OlYuKatnsD

DJ capped his marvelous seven-under 63 and back-nine 29 with an appropriate final shot:

He entered the clubhouse at nine-under for the tournament, trailing Berger by a stroke and tied with Koepka for second place. However, Berger responded with a birdie on No. 9, extending his lead back to two strokes on the final turn.

After a Berger bogey dropped him to 10-under through 10, Phil Mickelson buried a long putt to suddenly make things very interesting on the back nine:

Nevertheless, while people kept getting close, the 23-year-old Berger kept responding like a veteran. After Lefty got within one stroke, Berger birdied No. 12 and 14, getting to 12-under and pushing his lead back to three strokes.

Koepka didn’t quietly, as he nearly dropped in an eagle from the fairway on No. 17 to get to 10-under, which is where he would finish:

Near perfection from Koepka.

What a shot. #QuickHits https://t.co/o6OufrAveF

But Berger wouldn’t budge. He birdied 15–he his third in four holes–to run his lead back to three strokes, then gave himself some breathing room with a clutch six-foot par putt on No. 17:

He didn’t need it, though, as he avoided the water on 18 and calmly parred to close out the impressive victory:

"It's the greatest feeling."

The newest PGA TOUR champion talks about winning for the first time. https://t.co/xdP5FULxzT

Seeking the first PGA TOUR win of his young career, Daniel Berger enters the final round at 10-under with a three-stroke lead over D.A. Points, Steve Stricker and Phil Mickelson.

It’s admittedly a weak field with most of the world’s top golfers resting up for next week’s U.S. Open, but it has still been an impressive showing thus far from Berger, who has hit 15 birdies and only three bogeys.

A chip-in to take the lead by three shots? That's enough to make Daniel Berger's birdie on 17 the #ShotOfTheDay https://t.co/I3ciV4QHj4

While last season’s PGA TOUR Rookie of the Year doesn’t boast a lot of experience in this position, he’s not showing many nerves.

“I just have to be myself,” he said after Saturday’s one-under 69. “I feel like when you’re kind of in this position you can kind of try to do things that normally you wouldn’t do, and (I’ve) just got to have fun out there and be myself and see what happens.”

No one has won the US Open after winning the previous week’s tournament, but it’s safe to say Berger doesn’t really care about that right now.

Read More
Golf, PGA Tour
Find out who was able to capture a win at the 2016 St. Jude Classic on Sunday at TPC Southwind.