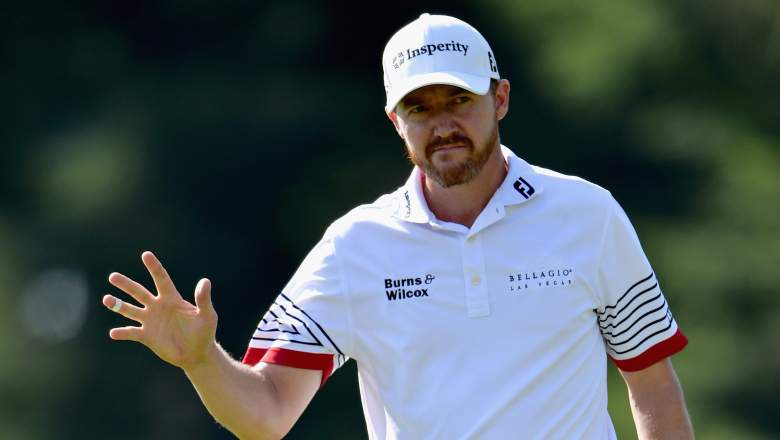 Jimmy Walker has been a professional golfer for 15 years, including the past 10 as a full-time member of the PGA Tour.

While he’s enjoyed a good bit of success, he has yet to get the words “major tournament winner” on his resume.

He is trying to change that at the 2016 PGA Championship, which is being played July 28-31 at Baltusrol Golf Club in Springfield, New Jersey. After two rounds of the rain-delayed event, Walker was tied with Robert Streb atop the leaderboard at 9-under, 2 strokes better than the field.

So who is Jimmy Walker? Keep reading to learn more about him:

His family moved to San Antonio, Texas, when Walker was a child. He was taught the game by his father, who was a scratch golfer. Walker attended New Braunfels Canyon High School before playing collegiately at Baylor University.

Walker is married to the former Erin Stiegemeier, whom he met in 2004 at a Nationwide Tour event where she was volunteering. The couple has two sons and the family now calls Boerne, Texas, home.

Since turning pro 15 years ago, Walker has 8 career professional wins — 5 on the PGA Tour and 3 on the Web.com (formerly the Nationwide Tour). His first PGA Tour victory was at the October 2013 Frys.com Open and his most recent W was at the March 2015 Valero Texas Open, an event he won by 4 strokes over Jordan Spieth.

Walker, who is currently ranked 48th in the world, has amassed over $19 million in prize money on the PGA Tour, including nearly $1.5M in 2016.

Walker has never won a major tournament, but has 3 top 10 finishes in 18 starts. Again, 2014 proved to be Walker’s finest season to date. He finished tied for 8th in the Masters, tied for 9th in the U.S. Open, tied for 26th at the Open Championship and tied for 7th in the PGA Championship — all career-best finishes.

For the 2016 year, Walker is 50th in the FedExCup Standings with 752 heading into the PGA Championship at Baltusrol. While Walker packs a wallop off the tee (300 yards per drive), his short-game has been outstanding this year, ranking in the top 10 in a number of approach categories.

He does so with a Titleist driver, irons, wedges, balls and a Scotty Cameron putter. Walker also uses a TaylorMade 3-wood.

There aren’t many professional golfers in the world who share the same off-the-course hobbies as Walker does.

Drive for show, putt for dough by day and an astrophotograher by night.

Astrophotographer? Yes, in his spare time Walker uses an astroimager to take photos of the skies at night, capturing stars, galaxies and nebulas, to name a few subjects.

Walker takes it seriously, as does Celestron, an optics company specializing in products like telescopes, microscopes and binoculars. The company is one of Walker’s sponsors.