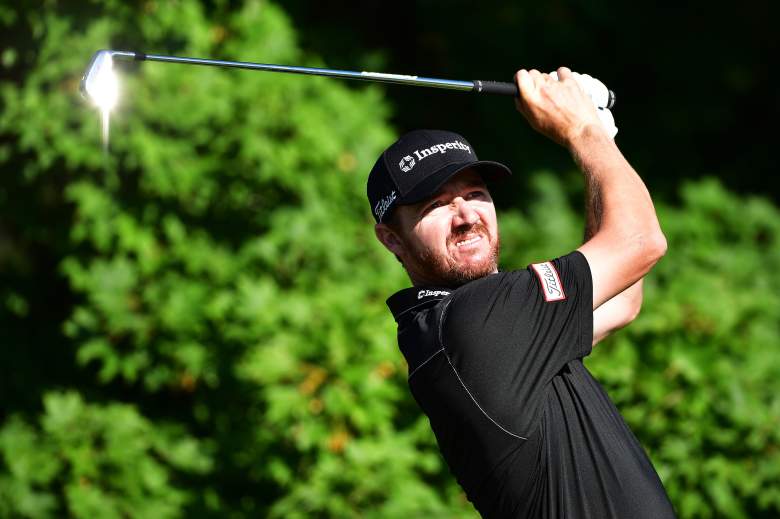 Jimmy Walker of the United States hits a tee shot during a practice round prior to the 2016 PGA Championship at Baltusrol Golf Club on July 27, 2016 in Springfield, New Jersey. (Getty)

Jimmy Walker is tied with Robert Streb for the lead at the PGA Championship after the second round at Baltusrol Golf Club.

Walker, who is ranked 48th in the world, has won five PGA Tour events in his 15-year career.

Here’s what you need to know about his wins, career earnings and net worth. 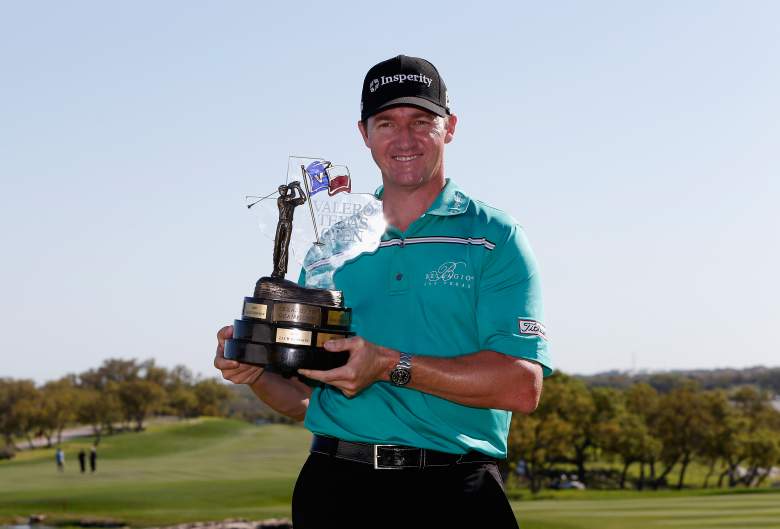 Jimmy Walker poses with the Valero Texas Open trophy after winning in the final round at TPC San Antonio AT&T Oaks Course on March 29, 2015 in San Antonio, Texas. (Getty)

The 37-year-old golfer has a net worth estimated at $15.5 million, according to Sport Rich List.

How does that compare to other top golf pros? Jordan Spieth’s net worth is estimated at $77.4 million, according to Money Nation. While Celebrity Net Worth estimates Dustin Johnson’s to be $20 million. 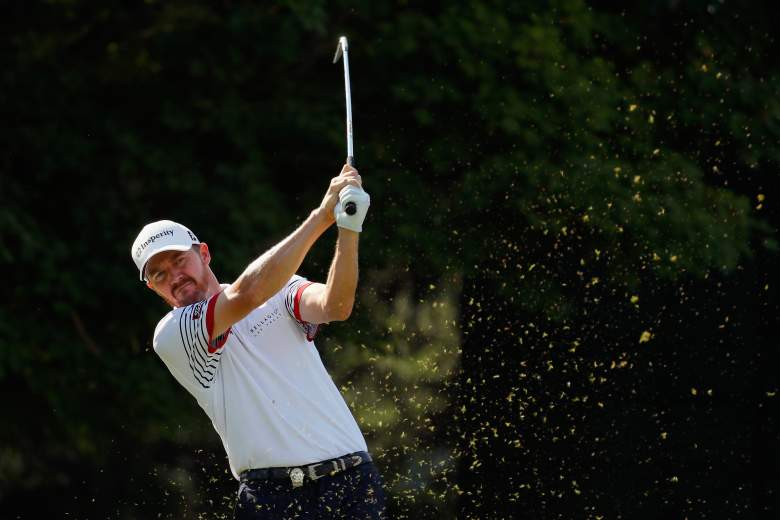 Jimmy Walker plays his shot from the 12th tee during the second round of the 2016 PGA Championship at Baltusrol Golf Club on July 29, 2016 in Springfield, New Jersey. (Getty)

Walker has a chance to increase his earnings this weekend at the PGA Championship. The purse is $10 million that will be split among the 86 players that made the cut at Baltusrol Golf Club. The winner will pocket $1.8 million.

3. He Has 5 PGA Tour Victories 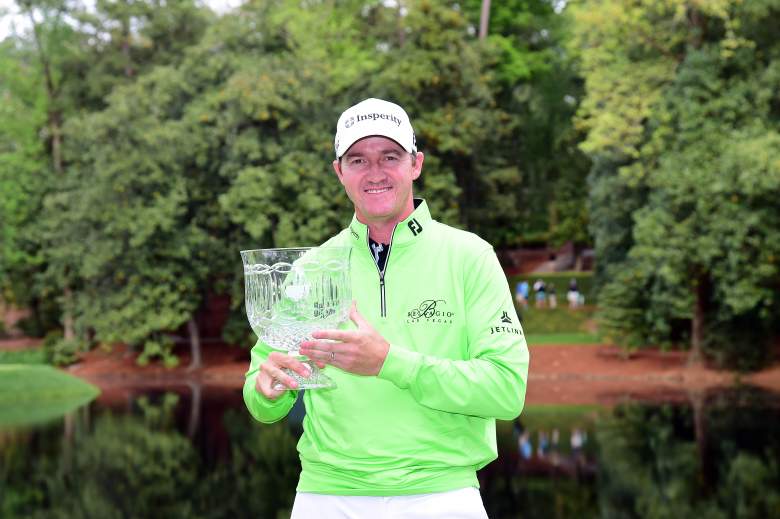 Jimmy Walker holds the winner’s trophy after the Par 3 Contest prior to the start of the 2016 Masters Tournament at Augusta National Golf Club on April 6, 2016. (Getty) 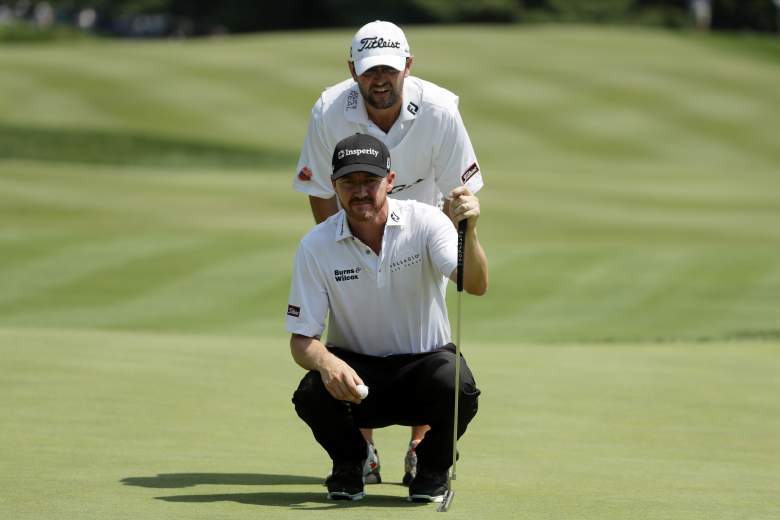 Jimmy Walker and caddie Andy Sanders line up a putt on the sixth green during the first round of the 2016 PGA Championship. (Getty)

Andy Sanders has been Walker’s caddie since 2007. He’s been by his side for the ups and downs of Walker’s career, including three tournament wins in 2014.

Walker won three times in the first eight events of the 2014 PGA Tour season. He joined Tiger Woods, Phil Mickelson and David Duval as the only players in the last 20 years to win three of eight tournaments to begin a season. Walker has credited Sanders with much of his success on the course.

“Andy is one of the best putters I have ever known,” Walker told PGATour.com. “He’s great at reading greens, and even though we have different playing styles he helps me see courses in a different way. He knows my swing, and we can talk about it when something is working and when something isn’t working.” 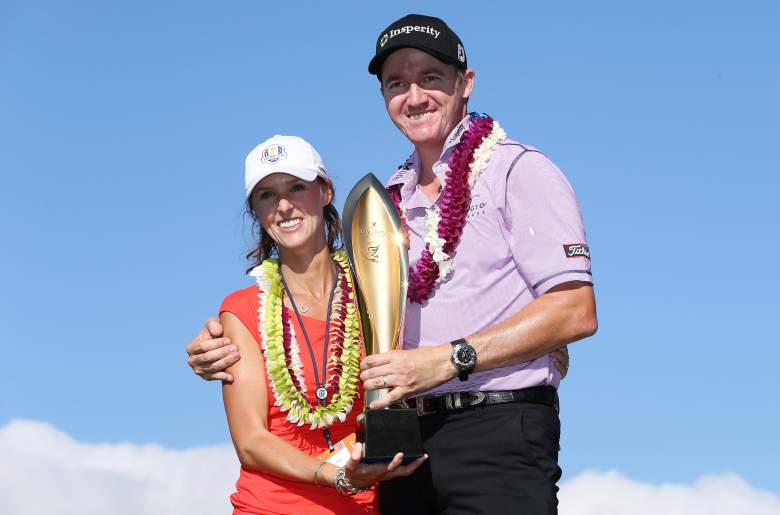 Jimmy Walker celebrates with his wife Erin and the winner’s trophy after the final round of the Sony Open In Hawaii at Waialae Country Club on January 18, 2015. (Getty)

In 2013, Walker’s wife, Erin published an article on Golf.com defending the sport, and refuting an article that described professional golfers as lazy due to the “astronomical” rise in purses.

“Maybe there are a handful who are satisfied with just making cuts, making their check and heading home,” Erin Walker wrote, “We certainly don’t know any of them. Every guy we know is working as hard as he can to be as good as he can be… It’s a great life but not always an easy one.”

In the article, she also took a jab at golf writers:

The 200 or so men on the PGA Tour are the best in the world at their chosen profession. They represent about .0001 percent of the population. Yes, they are paid well for their talents, but if you ask me — as opposed to the Golf.com staffers — they certainly deserve it.

She has defended her husband’s strong work ethic on multiple occasions.

During an interview with PGATour.com in 2014, she said:

I’m so proud of him because he’s worked really hard and we’ve had some bumps in the road. Just dealing with what life throws at you, but still having the perseverance to work a little harder and try some new things. It’s not about the money, it’s not about the fame–it’s nothing like that. It’s about being recognized, I think, by your peers that, you know, he’s the real deal.

Erin also described the challenges of life on Tour.

“You don’t realize how much it takes a golfer, professional athlete, to keep them focused on their sport.”