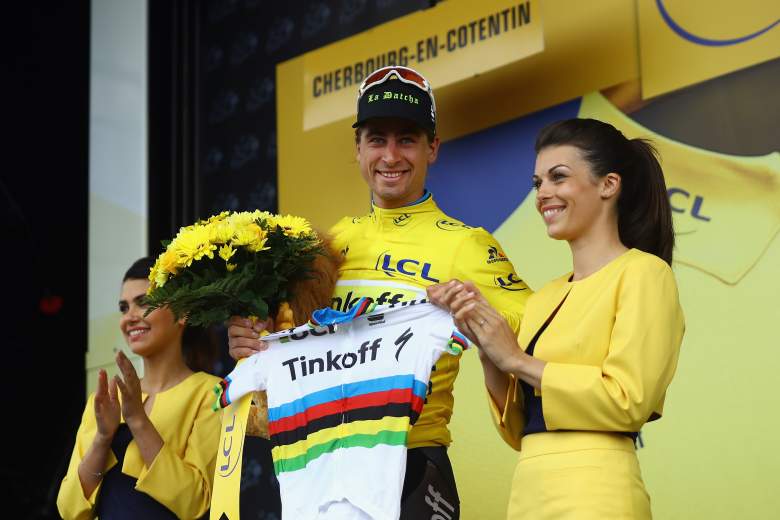 Peter Sagan of Slovakia and the Tinkoff team celebrates on the podium after winning stage two of the 2016 Tour de France. (Getty)

World Champion Peter Sagan won the second stage of the 2016 Tour de France on Sunday. Sagan picked up his first Tour stage win in three years and will don the yellow jersey for the first time ever in his career.

His teammate Alberto Contador suffered another difficult day– taking a nasty spill for the second consecutive stage and losing more time in the overall.

Mark Cavendish had the yellow jersey after the first stage, but he lost a lot of ground on the second stage, finishing 45 seconds behind Sagan and falling out of the top ten in the general classification standings.

Sagan will take over the yellow jersey heading into Stage 3 on Monday.

Stage 3 takes the peloton away from Normandy with a 223.5 km ride south from Granville to Angers. The Tour will take place from Jul 2 to 24. This year’s “Grand Boucle” begins in picturesque Normandy before moving south to the Pyrenees, over to the Alps, and back up for its historic finish on the Champs-Élysées in Paris. There are 21 stages in all.

Where: 223.5 km from Granville to Angers

Read More
Sports
World Champion Peter Sagan will take over the yellow jersey heading into Stage 3 of the Tour de France on Monday. Here's the details on how to watch the broadcast.