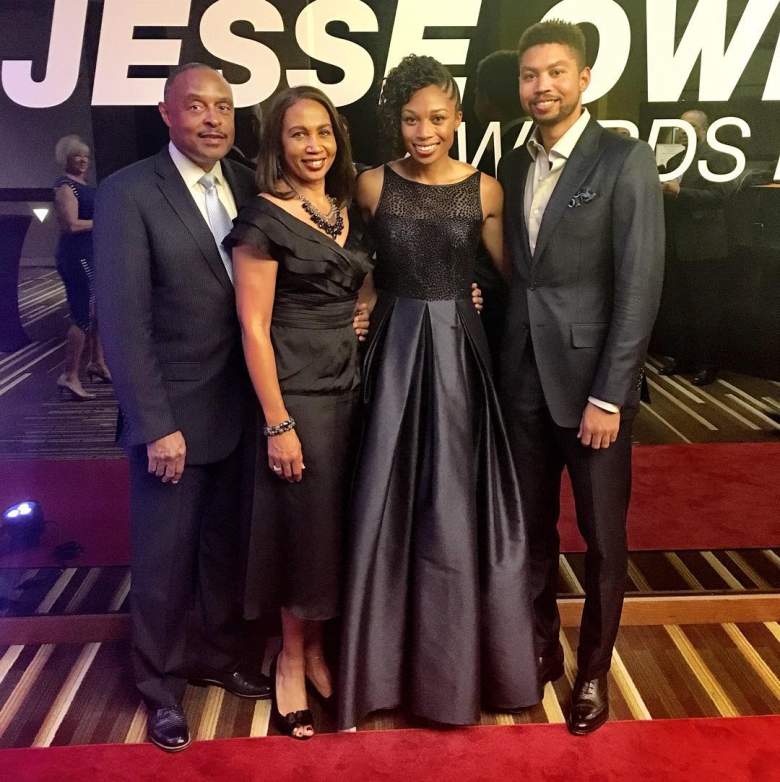 U.S. sprinter Allyson Felix has said her family and faith have guided her athletic career. (Instagram)

Allyson Felix claimed her first Olympic medal at the age of 18 at the 2004 Athens Olympics, winning silver in the 200-meter. Since then, the four-time Olympian has won six Olympic medals. On Monday night, Felix will race a talented field in the 400 meters in Rio as she aims for her second individual gold medal and fifth gold medal overall.

The 30-year-old U.S. sprinter, who is the 2015 400-meter world champion, is running the individual 400-meter final for the first time in her Olympic career.

Felix, who is arguably one of the most impressive athletes of the decade, has won more world championship gold medals than any other U.S. track and field athlete. In addition to her Olympic medals, she holds 19 medals from international competition.

Despite the success, Felix remains humble and grounded. Here’s everything you need to know about her background and family.

1. Felix Grew Up in California With Her Parents & Brother

Always been his shadow. Always wanted to be just like him. Nothing has changed. #nationalsiblingday

Felix was born November 18, 1985 in California to parents Paul and Marlean Felix. She has one older brother, Wes.

Felix has described her running ability as a gift from God, “For me, my faith is the reason I run. I definitely feel I have this amazing gift that God has blessed me with, and it’s all about using it to the best of my ability.”

Ahead of the London Olympics in 2012, Marlean admitted watching her daughter race can be nerve-wracking, however she trusted whatever the outcome may be.

“But the good thing is, we’re Christians and we take our faith seriously,” Marlean told USA Today. “Even though this is her goal and we want so badly for her to achieve it, if it doesn’t work out, she’ll be fine.”

“We knew she was fast, but we didn’t realize how fast until she qualified for the state meet as a freshman,” her father told the Los Angeles Times. 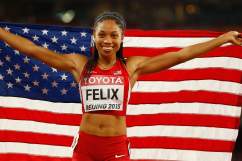 Allyson Felix’s Net Worth: 5 Fast Facts You Need to Know

2. Her Father Is a Minister

Felix’s father, Dr. Paul Felix is an ordained minister who teaches New Testament Greek at the Master’s Seminary in Sun Valley, Calif. He is currently the pastor at Fairview Heights Baptist Church in Inglewood, and president of Los Angeles Bible Training School. In an article with the Los Angeles Sentinel, he spoke about balancing the various roles. Dr. Felix credited much of his success to his wife, and family.

“I married my wife, Marlean, in 1976 and she is active in ministry as a Women’s Conference speaker and instructor at the Los Angeles Bible Training School. Also, she is an elementary school teacher,” he said to the paper.

Dr. Felix also explained that he learned a lot from his own father, who was also a minister.

Felix has said her faith inspires, and grounds her.

“Growing up as a preacher’s kid has really grounded me,” Felix told USA Today. “I’ve grown up with these amazing parents who are hard workers, and they truly live out their faith. They’ve been amazing role models for me. I feel like I really picked up on what they taught me and kept that with me all along in my running and in my career.”

3. Her Mother Is an Elementary School Teacher

Great time on The Today Show this morning with my amazing mom! The person who doesn't care if I win, lose or never run again…she will love me just the same! #ThankYouMom #100daysout

Her mother, Marlean is an elementary school teacher at Balboa Magnet Elementary in Northridge, California. Education is something Felix’s parents prioritized for both of their children.

Just days before beginning her college career at University of Southern California, Felix forfeited her scholarship and NCAA eligibility by turning pro in 2004. At the time, she signed a reported six-year, $1-million-plus contract with Adidas. However, Felix never wavered on her intention to take a full course load.

Adidas would later pick up the cost of her college tuition. Felix graduated from USC with a degree in elementary education in 2008. She completed her degree in four and a half years while competing as a full-time professional athlete. Following her athletic career, Felix wants to pursue her mother’s field and teach fourth- and fifth-grade, according to USA Today.

“It was kind of crazy going to school and doing track at the same time,” she told USA Today. “Actually, it was shocking. I thought it was going to be like high school, where you do practice and you do your schoolwork and it’s just kind of easy to balance. But with all the traveling and not being a student in an athletic program and not having tutors or extra help that the student-athletes get, it was hard. I took a lot of stuff on the road. Somehow, I made it work.”

Felix also said completing her college degree was a promise she had always made to her parents.

“I had promised my dad I would go to school at the same time and go all the way through USC,” she said. “So it wasn’t ever a question of whether I was going to do it or not.”

4. Her Older Brother Was Also a Sprinter

Happy Birthday @pwesley22! Thank you for always having my back. Helping me to reach my greatest achievements and carrying me through my most devastating failures. Thank you for always pushing me to be better, never letting me win when we were growing up and always encouraging me no matter how bad the situation might look. You are always behind the scenes and never get the credit you deserve. After all these years, I still just want to be like you!

In an article Felix wrote for The Players’ Tribune last fall, she opens up about her biggest inspiration: her older brother Wes.

In an article for espnW, Wes boldly claims he’s the faster sprinter of the two.

“I wouldn’t test it, but there’s still a part of me that believes maybe I could beat her at 100 meters.”

He also revealed some interesting family stories, including that no one in their family calls Allyson by name.

Everyone close to her calls her ‘Shug,’ like sugar without the ‘ur.’ After she was born, my dad felt we looked exactly the same, so he called her ‘Wes in a Dress’ for a while. Then my uncle was saying, ‘She’s sweet as sugar. We need to call her ‘Shuggah Puggah.’ My dad was like: That’s never gonna fly. Then it gets shortened, between my mom and dad, landing on ‘Shug.’ Today, she’s still ‘Shug,’ and my parents don’t care if they’re sitting on the couch talking to NBC, that’s what they call her. Even in the stands at the Olympics and world championships, that’s what they’re screaming out.

Family is everything!!! It's a blessing to never have to face anything alone.??

Felix has said in various interviews that her brother has offered unwavering support throughout her career. After Felix’s crushing second-place finishes at the 2004 and 2008 Olympics, Wes was there to encourage her.

Not long after the Beijing Games, however, he was diagnosed with a liver virus which immediately ended his own athletic career. Wes turned his attention to another aspect of the sport: serving as his sister’s agent. Since then, he’s helped her gain several new sponsorship deals, and has been her mentor.

When Felix was injured in the women’s 200-meter final at the 2013 worlds, it was her brother who carried her off the track.

“My recovery from the injury in 2013 and redemption at the 2015 World Championships would not be possible without the encouragement and advice he’s provided over the years,” Felix wrote in the Players’ Tribune.

“As I build on this success, I do it with the utmost confidence that one of the essential constants in my life -my brother — is here to help me along the way. Thank you, Wes.” 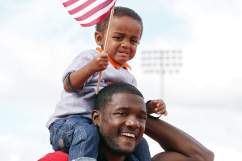