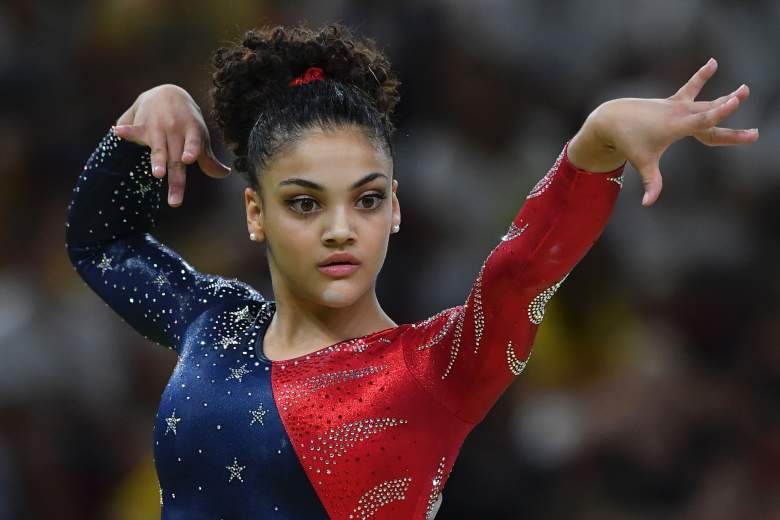 Laurie Hernandez competes in the qualifying for the women’s beam event of the Artistic Gymnastics at the Olympic Arena during the Rio 2016 Olympic Games. (Getty)

At only 16-years old, Laurie Hernandez is the youngest athlete on the United States’ gymnastics team, and has quickly captured the attention of millions for her athleticism, poise and grace at the Rio games.

Hernandez has spoken of her parents’ influence on her life in various interviews.

“My parents have tried not to intrude,” she told ESPN. “They kind of stayed apart from my gymnastics but are very supportive, and that’s very helpful as a gymnast to not have your parents say, ‘Did you do this today?’ and just be very on top of you. I think it helps a lot that they’re laid back, and you just get to come home to open arms.”

When asked who has been the most influential on her gymnastics career, Hernandez told NBC, “My parents, as well as my family have supported me since the beginning. They are always there for me when I need them.”

Here’s what you need to know about the beginning of her gymnastics career, and her parents.

1. Her Mother & Father Are Puerto Rican

#HappyMothersDay to my #1 cheerleader. Here's to one of the rocks in my life. You helped mold me into who I am today? love you and hope your day is amazing!❤️✨

Laurie Hernandez was born on June 9, 2000 in New Brunswick, New Jersey. Her parents Wanda and Anthony Hernandez are of Puerto Rican descent. Hernandez’s grandparents are from Puerto Rico.

She is the first U.S.-born Latina since 1984 to go to the Olympics with the U.S. gymnastics team, according to NBC News.

Hernandez is the youngest of three children: she has a sister, Jelysa and a brother, Marcus.

2. Her Parents Put Her in Ballet Class at a Young Age

Merry Christmas! I'm so grateful to spend today with the people I love☺️?❤️

Wanda and Anthony initially put their daughter in dance and ballet classes. However, it wasn’t quite holding her attention, according to the NBC Olympics website. Her parents had to bribe her with treats to attend class.

When Hernandez was five years old, another activity caught her eye: gymnastics.

“My earliest memory was watching gymnastics on live TV, and wanting to do what the ‘big girls’ did,” Hernandez told the Latin Times. “I started a gymnastics class at five years old, but it became serious at seven.”

3. Although She Goes By Laurie, Her Parents Named Her Lauren

Happy #NationalSiblingDay ! We have to get an updated pic cause we haven't all been together in so long? y'all are my rocks and I wouldn't laugh as hard as I do without you guys❤️ love you both!?✨

When Hernandez was born, her parents named her Lauren, however Laurie became her nickname once she started gymnastics because there were too many Laurens at her gym.

It didn’t take long before she captured the attention of Maggie Haney, who has now been her coach for nearly 10 years. Hernandez quickly advanced through junior gymnastics– finishing 21st in the all-around at the national championships in 2012. By 2013, the 13-year-old Hernandez finished second and won event medals on uneven bars, balance beam and floor exercise.

Hernandez’s debut to the senior level occurred in 2016 at the City of Jesolo Trophy in Italy, where she placed third in the all-around with a score of 58.55.

Wanda is an elementary school social worker who also works with delinquent teens, according to ESPN. In the article, she recounted the story of her daughter finishing 21st in a gymnastics competition when she was 12.

“I’ll never forget it, she was looking at it like she failed,” Wanda said to ESPN. “And I said, ‘You did fantastic. Do you know how many people would love to be No. 21? That’s cause for celebration. I think that’s when she was able to grasp this wonderful gift she has and how phenomenal it is to have this opportunity. We tried to teach her the art of gratefulness.”

Wanda served in the Army Reserve for six years. Laurie told NBC that growing up in a military family taught her the importance of following rules.

She taught me the importance of following rules, finishing what I start, never giving up, leadership skills, teamwork, staying positive, motivated and how to pack the military way when I’m traveling!

Wanda told ESPN that as a mother, it can be difficult to always know what is best for a young aspiring athlete, and there have been times of doubt.

“As a parent, you question ‘Am I doing everything I need to protect her?’ We just wanted to make sure in the midst of all of this that we’re doing what’s right for her and keeping her safe,” she said.

5. Anthony Is a Court Clerk

Happy birthday to the best dad ever! Thanks for always being there for me❤️ love you and hope your day is as awesome as you!

Anthony is a court clerk for the New York City Supreme Court in the civil branch.

Laurie has been homeschooled since the third grade, and wants to continue her education as an NCAA student-athlete at the University of Florida.

Homeschooling has allowed Laurie to devote most of her time during the day to training.

She took NBC through her daily schedule:

A typical training day is waking up at around 7:00 a.m., and be at the gymnastics facility by 8:30 a.m. Practice hours range from five to six hours a day, six days a week. Two days a week I have half a day, which means about four hours. When I come home, that is where I find time to get my school work done, as I am homeschooled.

Read More
2016 Olympics, 5 Fast Facts
At only 16-years old, Laurie Hernandez is the youngest athlete on the United States' gymnastics team. Here is more on her parents, and her family.