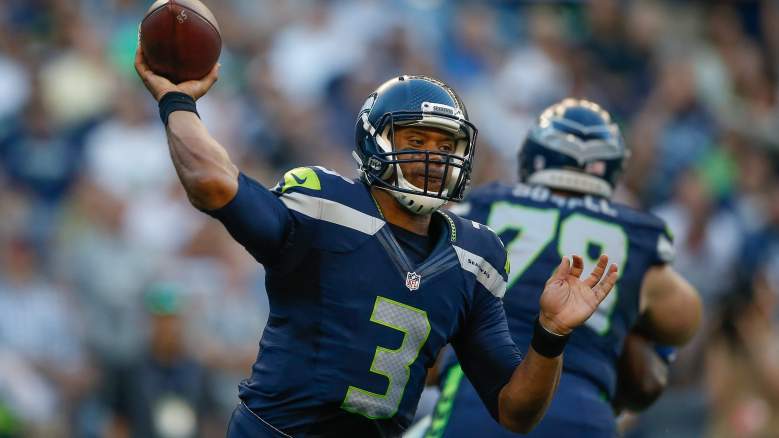 SEATTLE, WA – AUGUST 25: Quarterback Russell Wilson #3 of the Seattle Seahawks passes against the Dallas Cowboys at CenturyLink Field during a preseason game on August 25, 2016 in Seattle, Washington. (Photo by Otto Greule Jr/Getty Images)

You can click here for the full box score, and you can read on for the top highlights and moments:

Romo tackled from behind and is clutching his back. Not good… https://t.co/ipOI1NMDrW

On just the third play from scrimmage, Romo escaped the pocket and was hit from behind by Cliff Avril while attempting to slide, resulting in awkward finish. He immediately clutched his back and appeared to be in considerable pain, although he ultimately walked off on his own power, and early reports were encouraging for Cowboys fans:

Romo warming back up on the sideline, it looks like…

Romo reportedly felt good enough to come back into the game, but the Cowboys opted to play it safe and roll with impressive rookie Dak Prescott.

Ezekiel Elliott looking good when he gets that corner pic.twitter.com/muQ07dRjEP

After a quiet opening drive, Elliott was dominant on just the second NFL possession of his career, piling up runs of nine, nine, 13 and eight yards on the Cowboys’ seven-play, 81-yard touchdown march. Against one of the most physical defenses in the NFL, the No. 4 overall pick looked explosive, bursting through holes and showing why he drew comparisons to Adrian Peterson.

I think Ezekiel Elliott's gonna be OK running behind this line pic.twitter.com/2lzBrvNlcn

#Seahawks defenders trying to send a message to Zeke, but he's lowering his pads and delivering hits, not backing down. Great theater.

That was it for Elliott, who finished his day with 48 yards on seven carries.

The Seahawks first-team offense, which didn’t score in the first preseason game, had six total drives. Two went for a combined 12 yards, while the other four were scoring drives that went for 68, 58, 42 and 70 yards, respectively.

When the offense was clicking, it was mostly a result of the passing game. Russell Wilson was 12-for-14 on the four scoring drives, providing a pair of touchdown highlights. The first, a gorgeous touch pass to Paul Richardson in the second quarter:

THIS is the Russell we've been waiting for.

The second, a classic Wilson scramble before finding Tyler Lockett in the corner of the end zone:

Filling in for Romo after the third play of the game, the rookie quarterback continued to look like anything but a first-year player. Despite playing without Dez Bryant, he went 17-of-23 for 116 yards and a touchdown.

On the last drive of the second quarter, Prescott went 8-for-8 for 64 yards, showing tremendous poise inside the no-huddle offense, as the ‘Boys were able to get a field goal and tie the game at 10 heading into intermission.

Best thing about Dak– as the speed picks up, he's still relaxed and showing tremendous poise. Can't really teach that.

He had a little trouble moving the ball in the third quarter, but it was still another impressive showing.

One of the stars of the preseason through the first two weeks, Michael tallied just 11 yards on four first-half carries. But he finally found some running lanes on the first drive of the third quarter and shot through them like a cannon for gains of 20 and 17 yards, leading the ‘Hawks to a field goal.

Christine Michael is going to have a huge season. Way he's running this preseason is a living, breathing example of a light switch turned on

Michael finished with 58 yards on seven carries, running his impressive preseason totals to 24 rushes and 157 yards (6.5 yards per carry).

In his first possession under center, Boykin led a nine-play, 72-yard drive, capping it off with an impressive 16-yard touchdown run that saw him evade pressure in the pocket and out-run defenders to the corner of the end zone.

On the latter, local kid and University of Washington product Tani Tupou got the strip-sack of Jameill Showers, with Brandin Bryant recovering.

The Cowboys responded nicely after the lost fumble, marching 64 yards on seven plays on the next possession. Showers connected with Rodney Smith three times for 32 yards on the drive, including a fantastic six-yard back-shoulder touchdown connection to cut into Seattle’s lead:

Doesn't matter the game.
Or the time.