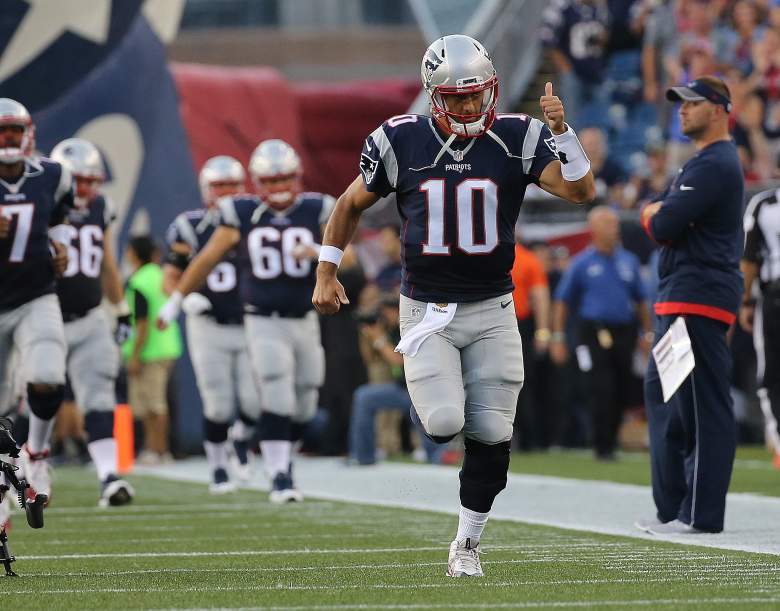 The New England Patriots defeated the Chicago Bears with a final score of 23-22 in their second preseason game.

In an unusual turn of events, Tom Brady did not take the field for pre-game warmups at Gillette Stadium, leading to confusion among media members and fans. Brady, who was set to make his debut after missing last week’s game to attend memorial services for a family member, was unexpectedly sidelined due to injury. Brady reportedly sliced his thumb on a pair of scissors as he was trying to pry something from the bottom of his cleat. As a result, Jimmy Garoppolo stepped in as starter.

After a slow start, the 24-year-old quarterback came alive in the second quarter. Garoppolo helped lift the Patriots out of a 11-0 hole by threading a 16-yard touchdown pass to find A.J. Derby late in the first half. He finished the night strong— completing 16 of 21 passes for 181 yards and a touchdown.

Garoppolo’s final throw of the game was his worst of the night. After a strong drive, Garoppolo made an ill-advised pass that was nearly picked off by Bears linebacker John Timu on 3rd-and-4. He played into the third quarter, and handed the reins to Jacoby Brissett with a 20-11 lead. Overall, Garoppolo showed significant improvement from the preseason opener.

As far as Brady’s thumb, The Boston Herald’s Jeff Howe is reporting that a source disclosed, “Tom will be OK in time.”

On the other side, the Bears first-team offense looked like a completely different group than in last week’s preseason opener against the Denver Broncos.

Quarterback Jay Cutler was efficient, completing eight of 12 passes for 83 yards. While Cutler did not throw for any touchdowns, he did lead a first-quarter scoring drive that Jeremy Langford finished with a five-yard touchdown run.

The Patriots are now 2-0 in the preseason. Although Chicago dropped to 0-2, Bears fans should be optimistic of the marked improvement from last week.

Here’s a look at the highlights from Thursday night’s game:

The Bears settled for a 36-yard field goal by kicker Robbie Gould after penalties plagued their first drive.

Patriots’ defense allowed a 34-yard run by Jeremy Langford on a play fake by Cutler. Langford ran it in for a 5-yard TD run. A successful 2-point pass from Jay Cutler to Rob Housler gave the Bears a 11-0 lead.

The Patriots were in position to score at only five yards away from a touchdown when Bears cornerback Tracy Porter stripped the ball from running back Brandon Bolden. On the next drive, the Patriots forced a three-and-out with help from Trey Flowers and Anthony Johnson who combined for a sack.

Gostkowksi Made a 21-Yard Field Goal

Jimmy Garoppolo Connected With AJ Derby for a 16-Yard Touchdown

After a slow start, the Patriots offense kicked it up a notch to close the first half with momentum. Garoppolo completed a 16-yard touchdown pass to Derby. He then found Chris Hogan in the end zone for the 2-point conversion.

After a strong drive by Garoppolo, an ill-advised pass was nearly picked off by Bears linebacker John Timu on third down— forcing the Patriots to settle for a field goal.

Gould cut the Bears deficit by three when he hit a 36-yard field goal.

Week 2 of the NFL preseason kicks off tonight as the Patriots host the Chicago Bears as four-point favorites, according to OddsShark.

The Patriots are coming off a 34-22 win over the Saints in which they scored two defensive touchdowns and rushed for two more in their preseason opener. Jimmy Garoppolo made his debut as a starter with a decent showing against the Saints. The 24-year-old quarterback finished with 11 completions and 168 passing yards.

The Bears are trying to rebound from an ugly 22-0 loss at home to the Denver Broncos. After two scrappy joint practices where tempers flared, the teams will meet at Gillette Stadium with kick-off set for 8 p.m. EST.