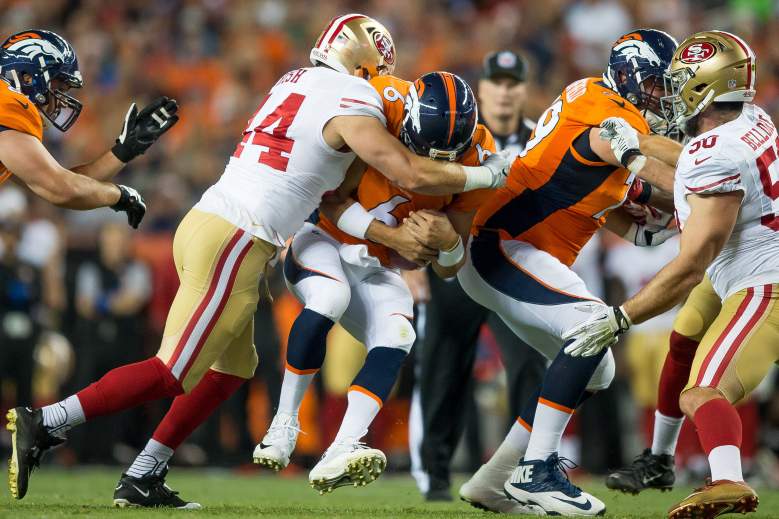 The 49ers were victorious against the Broncos. (Getty)

While the focus was on the quarterbacks for both teams, fans may not have a clearer picture of who their starter is after tonight’s contest. The 49ers did get a much deserved win in the matchup. San Francisco looked like the better team for most of the night.

Blaine Gabbert started the night off for the 49ers and had a solid showing. Gabbert was 6-of-9 for 69 yards in the game. Colin Kaepernick did not play as he continues to get his shoulder back to full strength. Jeff Driskel was the second quarterback to enter the game for the Niners and went 6-of-7 for 66 yards. Christian Ponder was the third quarterback off the bench but may have had the best outing of any San Francisco quarterback. Ponder finished 7-of-8 for 86 yards and a touchdown. He also had a stellar 22-yard rushing touchdown.

Trevor Siemian got the start for the Broncos. He was 10-of-14 for 75 yards and an interception. Siemian threw a costly pick-6 and no touchdowns. Mark Sanchez was 10-of-17 for 120 yards. Sanchez fumbled the ball twice. Both Denver quarterbacks fighting for the starting position were careless with the ball at times.

While Paxton Lynch was not perfect, he displayed the most playmaking ability of any quarterback on the Broncos roster. Lynch was 15-of-26 for 113 yards, 2 touchdowns and 1 interception.

Here’s how the 49ers came away with the victory.

Anderson ran through the 49ers defense making a couple nice cuts on a 19-yard touchdown run on the opening possession of the game. Anderson got off to a slow start last season, but finished strong the last two months.

Eric Reid Scored on a Pick-6

It was not the kind of start Trevor Siemian wanted. Early in the second quarter, he was intercepted by Eric Reid, and Reid ran it back for a touchdown. Siemian is battling Mark Sanchez for the starting position.

The 49ers came out in a shotgun formation near the goal line. Blaine Gabbert gave the ball to Carlos Hyde on a read option play, and Hyde ran it into the endzone for a 4-yard touchdown.

Neither Broncos Quarterback Was Impressive in the First Half

They both went 10-of-14 but made costly turnovers. Siemian threw a pick-6 while Sanchez had two fumbles. The offense also sputtered the first two possessions with Lynch in the game in the third quarter. With less than a month before the regular season starts, no quarterback has emerged yet as the favorite to win the starting job.

Lynch displayed his athleticism yet again in his second NFL game. One particular play it looked like Lynch was tackled for a sack before he threw off the defender and scrambled for a six yard gain. Lynch led his first NFL touchdown drive with an 8-yard touchdown pass to John Phillips.

Christian Ponder keeps on the zone read…
And scores!

Just a few weeks after being signed by the 49ers, Christian Ponder ran for a 22-yard touchdown. Ponder was the third quarterback off the bench after Blaine Gabbert and Jeff Driskel played early in the game.

Lynch threw his second touchdown pass to Durron Neal. It appeared as though he might be able to lead the Broncos back, but he threw an interception with less than a minute remaining to end the night. Aside from the interception, it was a stellar night for him.