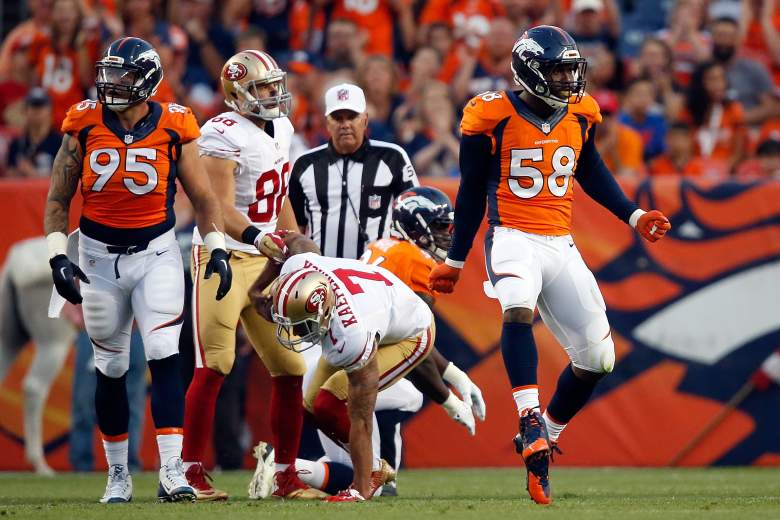 The Broncos take on the 49ers tonight in preseason action. (Getty)

The San Francisco 49ers and Denver Broncos square off tonight in both team’s second preseason game. The contest kicks off at 9 p.m. Eastern and will be broadcast by local affiliates.

TV Channel: The game will be broadcast locally by 49ers and Broncos affiliates. In the San Francisco area, the game will be broadcast on a number of channels including KPIX CBS-5 (San Francisco), KOVR CBS-13 (Sacramento), KION CBS-46 (Monterey) and KFRE CW-59 (Fresno). For those in the Denver area, the broadcast options include KTVD My-20 (Denver), KKTV CBS-11 (Colorado Springs), KJCT ABC-8 (Grand Junction) and KUCW CW-30 (Salt Lake City). Click here to see the full list of both team’s affiliates showing tonight’s broadcast.

Line: Broncos by 5.5 (Odds courtesy of OddsShark and are subject to change.)

Live Stream: NFL Game Pass subscribers can watch a live stream of all out of market preseason games including the 49ers-Broncos. Game Pass is offering a free 7-day trial.

On the Denver side, Trevor Siemian and Mark Sanchez are fighting for the position. Rookie Paxton Lynch has also flashed in limited action. Trevor Siemian will get the start tonight against the 49ers.

Denver is hoping their stellar defense can keep them in games while the offense continues to be a work in progress. The Chip Kelly era is underway in San Francisco after a down 2015 season for the 49ers.