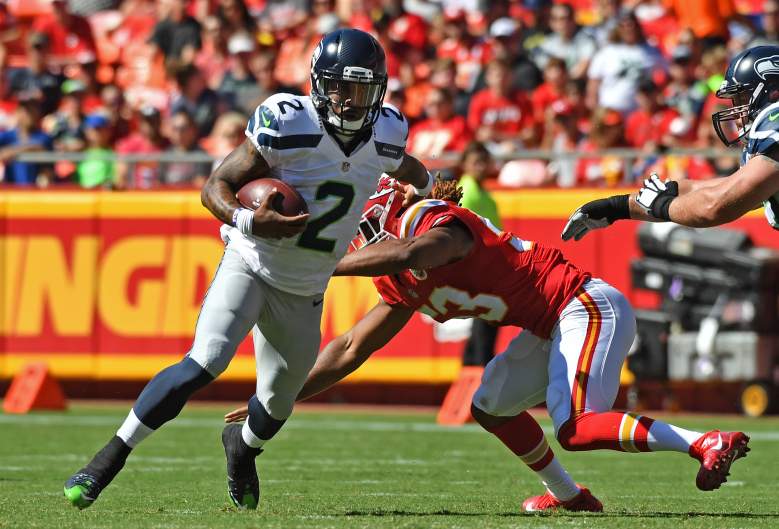 Trevone Boykin made the first preseason game between the Seahawks and Chiefs exciting. (Getty)

The Chiefs dominated for most of the game, but the Seahawks handed them a loss at Arrowhead Stadium in each team’s first preseason game. Rookie quarterback Trevone Boykin found receiver Tanner McEvoy on a Hail Mary on the final play of the game.

Down by one with no time on the clock, Seattle decided to go for two. The Seahawks converted on a running play to win the game.

Aside from the final two plays, there were a lot of positives for Chiefs fans to take away from the game. The first team offense had an impressive opening touchdown drive. Alex Smith was 3-of-4 for 36 yards in his only action of the game.

Second year cornerback Marcus Peters intercepted Russell Wilson just before the goal line to end a potential scoring drive for the Seahawks on their opening possession. Wilson was 3-of-6 for 34 yards and one interception.

Here’s how the Seahawks came away with the come from behind victory.

The Chiefs Scored First After a Nice Grab by Jeremy Maclin

First touchdown of the @chiefs season belongs to @spenceware11. And it sure as hell won't be his, or our, last. pic.twitter.com/uqJpjA39n4

Alex Smith and the Chiefs went into scramble drill mode early in the first quarter. Smith found Jeremy Maclin on the sideline to set up a one yard touchdown run by Spencer Ware.

After a nice highpoint catch by Tyler Lockett, Marcus Peters came up with a big interception on Wilson in front of the goal line. It stopped a Seahawks redzone drive on their first possession.

Chiefs attempt a 58 yard FG and it goes through. Widen the lead to 16-6 over the #Seahawks with 6:01 left in the third quarter.

After the first quarter, it was a game of field goals as the teams combined for five straight field goals. Santos had the most impressive kick with a 58-yarder midway through the third quarter.

With time expiring, Boykin threw up a Hail Mary at midfield to McEvoy for an improbable touchdown. The touchdown put the Seahawks down by one point. The team opted to go for a two-point conversion. Yes, the team decided to run the ball this time on the goal line and converted to win the game.

Read More
Football, Kansas City Chiefs, NFL, Seattle Seahawks
It took a Hail Mary for the Seahawks to defeat the Chiefs in their opening preseason game. See the highlights of the game, stats and much more from the incredible ending.