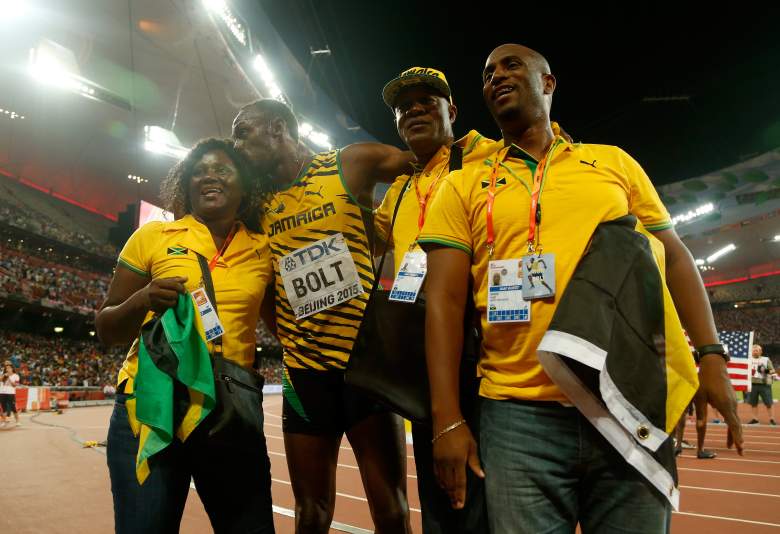 Usain Bolt celebrates with his family after winning gold in the men’s-100 meter final at the15th IAAF World Athletics Championships in 2015. (Getty)

Usain Bolt will attempt to become the first person to win three back-to-back Olympic 100-meter gold medals in the final on Sunday. Bolt is trying to win the 100, 200 and 4×100 relay — something he was able to do in the last two Olympics.

The 29-year-old Jamaican sprinter, who has an estimated annual earning of $30 million, already has twelve Olympic medals to his name, with nine of them being gold. However, he’s not satisfied just yet. Bolt, who has been dubbed “the fastest man in the world,” finished his first round in the 100-meter on Saturday, and on Sunday will defend the title he won in London, and Beijing.

As for his future after Rio, Bolt has said in the past that he intends to retire after the 2017 World Championships.

Here’s what you need to know about Bolt’s upbringing and his family.

1. He Grew Up With His Parents & Siblings in Trelawny, Jamaica

Bolt was born on August 21, 1986 in Sherwood Content, a small town in Trelawny, Jamaica to Wellesley and Jennifer Bolt. He has two siblings: his brother, Sadiki and sister, Sherine.

His parents ran the local grocery store in the rural area.

“Usain was born in this community,” Wellesley recently told the Telegraph. “He grew up here, he went to primary school here. Wherever he is, he would prefer to be in the country. He’s a natural country boy.”

Bolt spent most of his childhood playing cricket and football in the street with his brother.

“When I was young, I didn’t really think about anything other than sports,” he told the Times.

As a child, Bolt attended Waldensia Primary, where he first began to show his potential as a sprinter. By the age of twelve, he had become the school’s fastest 100-meter runner.

“At the age of 12, being in primary school, he started to compete in school sports and he was always on top and he was always beating his classmates,” Jennifer recalled to the Associated Press. “From then, we noticed he would be a great athlete.”

Bolt won his first annual high school championship medal in 2001 at William Knibb Memorial High School, taking the silver in the 200-meter with a time of 22.04 seconds.

2. His Parents Think Athletics Would Be Boring Without Their Son

I'm the man I'm today because of these two right here .Blessed to have them in my life.S/o to my mom and pop #EndlessLoveForThem

Bolt’s parents are in Brazil to see their son compete in one last Olympics. They told the Daily Mail they hope their son will become an ambassador for the sport after he retires.

“I would like him to be an ambassador for track and field,” said Jennifer. “He has put so much into the sport and after he leaves, it would be good for him to take on this role.”

She also told USA Today that she feels Bolt brings an upbeat personality and fresh interest to the sport.

“He will be put a little more fun into the sport,” Jennifer said. “Because I know after he (leaves) we don’t know who will take on his role, so we would like him to stay in the sport.”

She also spoke about the joy his athletic career has brought her own family.

“It’s really, you know, a pleasure knowing that we have the fastest man as our son because we get to go out, we do lots of interviews, get to go places,” she said. “It’s really a pleasure. It’s happy and feeling good.”

3. His Mom Hopes He Will Find a Wife After the Olympics

Jennifer is immensely proud of her son’s athletic accomplishments, however, she hopes he can have a “normal life” after Rio.

“I would hope he’ll settle down, get married and start his family,” Jennifer Bolt told CNN’s Don Riddell in a segment that aired Saturday.

“I know he’ll settle down because he has said it,” she said. “He told me many times that he’s going to start his family.”

Marriage may be in Bolt’s future, but he doesn’t seem to be in a rush.

“I’ve thought about it, but I know I’m not going to get married before 35, for sure,” Bolt told the Telegraph last month.

Bolt, who will turn 30 on Aug. 21, said he wants to make sure he’s ready before committing to marriage.

Bolt told the Telegraph last month that he has a girlfriend of two years. However, he intends to keep the relationship private.

“I want to keep it small for now, because I know when it gets out there’s going to be a lot of things to say, and I told her she can’t handle it,” he said. “Because I’ve been through the media.”

4. He Says His Upbringing Has Kept Him Grounded

Love is the only Solution #OneLove #PrayersUp

Bolt has said the values his parents instilled in him from a young age have helped him find, and maintain success.

“Mom and Dad were always at my races to cheer me on,” Bolt told the Jamaica Observer. “But while my mother Jennifer spoiled me…Dad kept pushing to make sure I went to training.”

NJ, a longtime friend of Bolt’s from primary school, told the Telegraph that in spite of his enormous success, Bolt has remained grounded.

His parents instilled the key values: respecting people, caring for people, he’s kind to a fault – too kind some might say. I don’t think he realizes he’s a celebrity. One time we were staying in France and he came down to the lobby and there were all these people outside, and he said to the bellman, who are they waiting for? The bellman said, they’re waiting for you.

5. His Mom Fed Him a Diet of Yams Growing Up

Well I couldn't catch my Pops but Mommy was slow..We all know now that I didn't get the speed from my mother.. Loll.. #SlowMommy #LotsofLoveforher

What does it take to create the fastest man in the world? Although his mom, Jennifer credits her son’s ability and hard work for his tremendous achievements, she also believes that a diet of yams may have played a role.

“In Trelawney, we grow yam – that’s our main crop, so Usain got a lot of yam to eat [growing up]. I don’t know if it’s the real secret but I know it’s good.”

Maurice Wilson, technical director of the Jamaican Olympic team told the Telegraph he also thinks the local diet has also had an effect on his physiology.

“Look at all the yams they get through,” Wilson said. “Yam is a highly fibrous carbohydrate food, which contains a substance, phytate, which can really assist with fast-twitch muscle fibers.”

His mom went on to say that Bolt was well-behaved and respectful from an early age.

“Well, it wasn’t hard [to raise a champion] because Usain is an obedient child,” Jennifer told the Daily Mail. “He listens to us. He did naughty things now and then as any child would but always, he listens to us and we are glad that he does.” 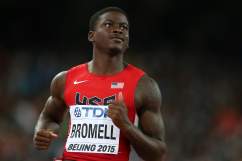