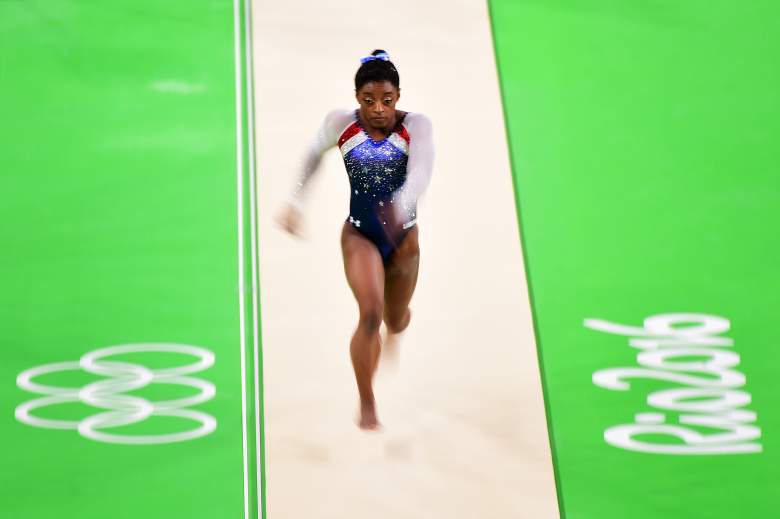 Click here to watch Biles’ vault from the individual all-arounds.

What sets Biles apart is her high level of difficulty. Two panels of judges score Olympic gymnasts these days– one panel starts the scoring at a 0, and adds points for difficulty-level, requirements, and connections. A second panel begins the scoring at a 10.0, and deducts based on execution. Biles’ difficulty score is so high that virtually no other gymnast– now or in the history of the sport– can touch her.

In Thursday’s finals, both Biles and Raisman completed an Amanar– considered one of the most, if not the most, difficult skill to perform on that event.  The move begins with a Yurchenko, and transitions into a two-and-a-half twist off a backward salto. In the qualifiers, Biles earned a 16.0 on the skill, which was the highest amongst all gymnasts competing in Rio. Her 15.866 in Thursday’s competition was still the highest of the meet.

Simone was born in Columbus, Ohio, on March 14, 1997. She graduated from high school in the summer of 2015, and spent her entire secondary education being homeschooled. On August 4, 2014, Biles verbally committed to UCLA, and posted the announcement on Twitter. On July 29, 2015, however, she decided to turn pro, forgoing her NCAA eligibility.

In an interview released by NBC on Thursday, US team coordinator, Martha Karolyi, admitted that she didn’t know what Biles was capable of when she entered the gymnastics scene three years ago. After Simone was awarded the gold medal, Karolyi told her, “I’m so proud of you, five years ago I couldn’t tell.” Biles’ win serves as a kind of ‘thanks’ to 73-year-old Karolyi, who will be retiring after this summer’s Olympics. On Tuesday, after Team USA won the gold medal in the all-around team final for women’s gymnastics, the girls nicknamed themselves The Final Five in honor of their team coordinator.

Who Is Aly Raisman Dating?