The Patriots hosted the Bears for joint practices on Monday and Tuesday in anticipation of Thursday night’s preseason match-up. However, it didn’t take long for things to get heated.

The teams engaged in several feisty skirmishes during Monday’s joint practice, including one that pulled in more than a dozen participants from each side. Although players and coaches broke up the fight before it escalated into a full-out brawl, it was the biggest altercation seen from the Patriots this offseason.

According to NESN.com, the fight was sparked when Bears wide receiver Alshon Jeffery and Patriots defensive back Malcolm Butler started going at it during an 11-on-11 drill. Several reports indicate the two began by grabbing each other’s facemasks, which led to aggressive shoving.

Butler was sent off the field shortly after the scuffle by Belichick, who has a zero-tolerance policy on fighting in the joint sessions. Jeffery stayed on the field to continue practice.

A look at the fracas. Nearly became a full-on brawl. pic.twitter.com/G7IXbiVdM4

Bears linebacker John Timu shoved Stork after the whistle during 11-on-11 drills, according to NESN.com. Stork responded by head-butting Timu and shoving other members of the Chicago defense, which led to his ejection from practice.

This isn’t new for Stork, who was flagged for unnecessary roughness when he head-butted Broncos defensive lineman Vance Walker during the AFC Championship Game loss in January. It also marks his second offseason fight. Stork was ejected from a minicamp practice in June when he fought with Pats defensive tackle Woodrow Hamilton.

“I think it’s just the competitiveness,” Hogan told reporters after Tuesday’s practice. “This is another team, and we’re a couple of weeks away from finishing training camp. We’ve been doing it, and that’s what happens. Guys out here are trying to compete. Guys are competing, and tempers flare a little bit, but that’s football. We’ll get back to it, and we’ve just got to keep working hard.”

While fighting is rare for the Patriots, it has been a common theme for the Bears throughout training camp.

Earlier this month Chicago quarterback called his team “dumb” for their tendency to fight.

“Now we’re getting to the point where we’re just kind of being a dumb team,” Cutler said, per CBS Chicago. “So we’ve got to find that fine line of when we’re being tough and when we’re being dumb. I think we’re right there on that edge, so now we kind have to start dialing it back and getting ready for games.” 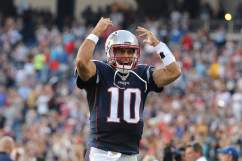