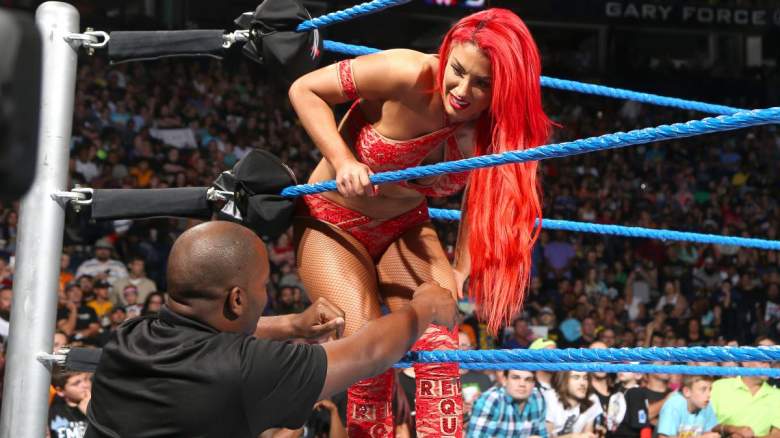 Eva Marie gets out of a match on August 2nd’s episode of SmackDown. (WWE.com)

Since the recent brand split, SmackDown has been lagging behind Raw in that it does not have its own Women’s Championship, nor does it have its own Tag Team Championship. Daniel Bryan has been hinting that both of these things will change soon, being introduced sometime after SummerSlam.

But according to Inquisitr, Eva Marie is rumored to become the show’s new women’s champion. After wrestling on NXT, Marie was signed to SmackDown during the 2016 draft, though she has yet to make her in-ring debut. Over the past few weeks, she has been functioning pretty brilliantly as a heel, continuously coming up with excuses as to why she can’t face Becky Lynch. In one show, she faked an injury to get out of the match, while last week, it was a “wardrobe malfunction” that prevented her from wrestling.

That wardrobe malfunction clip ended up being a big hit online, racking up nearly 5 million views on YouTube and becoming the most-watched WWE clip of the week. If the WWE is looking for a woman who can get a big reaction out of her audience, Eva Marie might be the superstar they need, as evidenced by that clip’s popularity and by her massive crowd reactions.

Backing up the rumor about Marie becoming the first women’s champion, Ringside News reports that she will receive a major push on SmackDown going forward.

Becky Lynch said in a recent out-of-character interview that she has nothing but respect for Eva Marie.

“She gets so much flack from fans for being this gorgeous woman who, apparently, they say can’t wrestle, but she puts in the hard work,” Lynch said. “I love working with talent like that.”

Becky Lynch herself is a fan favorite who many have hoped would become SmackDown‘s first Women’s Champion.

Read More
Pro Wrestling, WWE, WWE Smackdown
A new Women's Championship is coming to SmackDown Live. Who will be the first winner? Could it be Eva Marie?