Alberto Del Rio may be leaving the WWE next month. (WWE.com)

UPDATE: WrestlingInc is now reporting that Alberto Del Rio is indeed set to leave the WWE and that he told his lawyer he would be opting out of his contract two months ago. Del Rio was supposedly unhappy because he was promised a main event push when he returned to the WWE, a promise that was not fulfilled.

WWE superstar Alberto Del Rio is currently on suspension, but it is now being reported that he may not return even after his 30 days are up.

According to Dave Meltzer of Wrestling Observer Radio via Reddit, Del Rio’s name has been pulled from all upcoming WWE shows, even those that take place after his suspension ends. Meltzer notes that “you can probably read into that exactly what you’re reading into that.”

This isn’t all that surprising, as it had been previously reported that Del Rio has been unhappy with the way he has been utilized recently and that he was thinking about leaving even before the suspension happened. Del Rio’s contract also reportedly gives him the option of leaving in September, and so based on this, his dissatisfaction, and his name being missing from upcoming shows, a Del Rio departure seems quite likely.

Del Rio said a few months ago that he thinks he has three to five years of wrestling left in him, and at the time, he said he hoped to spend those with the WWE. But if he leaves World Wrestling Entertainment in September, could he perhaps be headed back to Lucha Underground or elsewhere?

What about Paige? Alberto Del Rio’s girlfriend and fellow WWE superstar is also on suspension for violating the wellness policy, and it has been rumored that she might leave the company too if Del Rio goes. But that may not actually be the case after all, as according to Ringside News, her contract extends into 2019. If true, being fired by the WWE would be Paige’s only way of leaving in the next three years.

Some of those rumors about Paige’s departure came after the WWE brand split, when the couple was reportedly very upset that they were drafted to different shows; Paige was sent to Raw and Del Rio was sent to SmackDown. Paige’s suspension will be up in mid-September, although it’s unclear if we’ll actually see her back on Raw after that. Before the suspension, she was already absent for quite a while due to a back injury she has been dealing with. 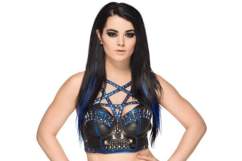