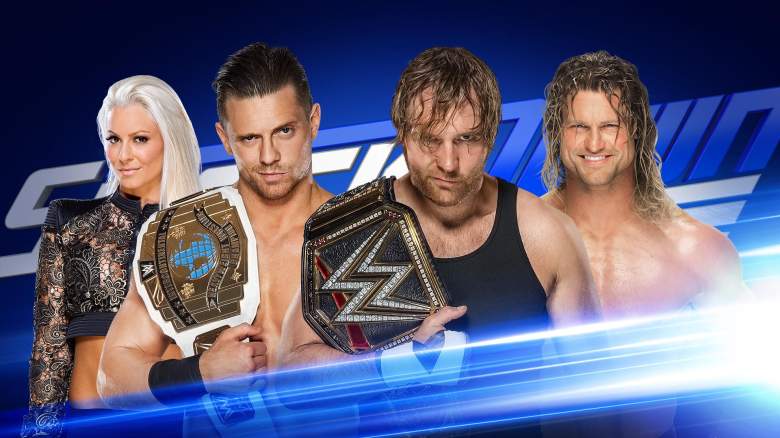 Tonight on SmackDown, it’s the final episode of the program prior to the highly anticipated SummerSlam pay-per-view. The show will be broadcast live from the Frank Erwin Center in Austin, Texas at 8:00 p.m. Eastern Time on the USA Network. Read on for live match results from throughout the episode, followed by a full preview of the night’s events written earlier this afternoon.

8:00 – Backstage, Randy Orton signs his contract to fight Brock Lesnar at SummerSlam. Heath Slater enters to present Daniel Bryan and Shane McMahon with a fruit basket. He wants his contract that Bryan and McMahon were going to give him last week, but they decline. The segment ends as Randy Orton eats an apple.

8:03 – Dean Ambrose and Dolph Ziggler join The Miz on Miz TV. The Miz says he’s shocked Ziggler proved everyone wrong with his current career resurgence, but he wonders what will happen if Ziggler fails at SummerSlam. Ziggler isn’t worried about that. Ambrose isn’t buying the new Ziggler; Dolph admits that he wants to kick Ambrose’s head off. Ambrose says that if Ziggler wins, his life isn’t going to change, and the pressure will merely get turned up. Everyone knows, Ambrose says, that Ziggler can’t handle pressure.

This Sunday, Ambrose says, Ziggler will prove to the whole world that he doesn’t want the championship bad enough. Ziggler says Ambrose doesn’t have what it takes to put him away. In the middle of his rant, Ziggler kicks Ambrose right in the face, saying that he is “that damn good.”

8:19 – Apollo Crews confronts The Miz after he keeps calling him Apollo Creed.

8:20 – The Usos, American Alpha & The Hype Bros defeat The Vaudevillains, The Ascension & Breezango.

8:31 – Naomi is scheduled to fight Eva Marie…but she doesn’t show up. She was delayed due to traffic.

8:40 – Backstage, A.J. Styles tells Alberto Del Rio he’s jealous that Del Rio gets to beat up John Cena tonight. Del Rio says that he’s been beating up John Cena for a long time, and he can do it again.

9:30 – John Cena defeats Alberto Del Rio. After the match, A.J. Styles quickly rushes into the ring to beat up John Cena and tell him that his time is up. However, Cena gets the last laugh, regaining his strength and throwing Styles into the commentary table.

At SummerSlam, WWE World Champion Dean Ambrose will fight No. 1 contender Dolph Ziggler. Ahead of their match, tonight on SmackDown they will join The Miz for an episode of Miz TV. What will their last conversation prior to SummerSlam be like?

Plus, another one of the biggest matches of SummerSlam will be A.J. Styles vs. John Cena. But first, Cena will go up against Alberto Del Rio on SmackDown this evening. Will A.J. Styles stay out of things, or might he take advantage of this as yet another opportunity to #BeatUpJohnCena?

On the women’s division side of things, Eva Marie will hopefully make her in-ring debut after avoiding her first match several episodes in a row. Also, what’s next for Alexa Bliss? And is a SmackDown Women’s Championship coming? What about a SmackDown Tag Team Championship?

Finally, we’ll almost certainly see more of Randy Orton on August 16th’s show, especially after Brock Lesnar’s appearance on Monday Night Raw last night. What will Orton’s message to his SummerSlam competitor be? It all begins tonight at 8 on USA.

Read More
Pro Wrestling, WWE, WWE Smackdown
Tonight on SmackDown, Dean Ambrose and Dolph Ziggler confront one another ahead of the SummerSlam pay-per-view. Here are all the match spoilers and results.