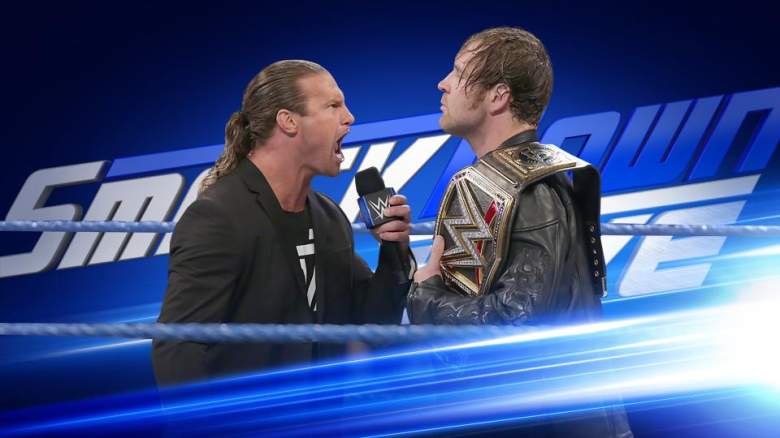 The feud between Dean Ambrose and Dolph Ziggler continues tonight on ‘SmackDown.’ (WWE.com)

Tonight on SmackDown, tensions will continue to escalate between Dean Ambrose and Dolph Ziggler, as will the competition between Mick Foley and Daniel Bryan. The show will be broadcast live tonight at 8:00 p.m. Eastern from Bakersfield, California. Read on for a match results and spoilers, followed by a full preview of the night’s events written earlier this afternoon.

8:00 – Backstage, Randy Orton says that he’s the legend killer, so he has no worries about facing Brock Lesnar at SummerSlam. Alberto Del Rio interrupts, saying what Orton is saying is ridiculous and threatening to break his arm. The two will have a match later tonight.

8:03 – Bray Wyatt enters. He says that he did not fall to Dolph Ziggler last week; rather, he was a victim. He says he is a god and no matter what Ziggler does, he can never be killed. Wyatt also says that SmackDown is his show now.

Dean Ambrose enters, mocking Bray Wyatt for saying he’s a victim and calling him a baby. Ambrose says that SmackDown belongs to the audience, not him, and it belongs to the WWE World Champion. Just as he’s considering beating down Wyatt, Dolph Ziggler enters.

Ziggler goes right after Erick Rowan and Bray Wyatt. Dean Ambrose runs in as well and is wailed on by Erick Rowan before Wyatt himself steps in. While trying to kick Wyatt, Ziggler accidentally hurts Ambrose instead, and the commentary team questions whether this was really an accident at all.

8:16 – Dean Ambrose confronts Dolph Ziggler, saying he’s pretty sure that kick in the face was not an accident. Just as they’re about to fight, Daniel Bryan and Shane McMahon intervene. Bryan announces Ziggler and Ambrose will have a match tonight against Wyatt and Rowan.

8:18 – American Alpha prepares to fight Mikey O’Shea and Mike Vega when seemingly all the tag teams in the division enter: The Ascension, The Vaudevillains and The Hype Bros, all of whom apparently want to get a closer look at the match.

8:21 – After the match, American Alpha, The Ascension, The Vaudevillains and The Hype Bros all brawl, with each team wanting to assert themselves as the best tag team of SmackDown.

8:26 – The Miz ignores Renee Young’s questions about Apollo Crews, flirting with Maryse instead.

8:29 – As Eva Marie prepares to battle Becky Lynch, she has a wardrobe malfunction and the match is cancelled.

8:32 – After Eva Marie retreats backstage, Becky Lynch challenges anyone else to go up against her. Alexa Bliss enters and accepts the challenge.

9:04 – Heath Slater speaks to Rhyno backstage, asking him for help because he really needs to win tonight and get signed to SmackDown.

9:10 – The Miz complains that he’s not on the cover of Scooby-Doo! and WWE: Curse of the Speed Demon, after which Scooby Doo steals his car.

9:22 – Backstage, Daniel Bryan and Shane McMahon are prepared to sign Heath Slater even though he lost the match. But then Slater enters and begins screaming at them before they have a chance to speak, storming out of the building.

9:39 – Dolph Ziggler and Dean Ambrose defeat Bray Wyatt and Erik Rowan. As the match wraps up, Ambrose attacks Ziggler, grabbing his WWE title with a smile.

Last week on SmackDown, Bray Wyatt challenged Dolph Ziggler for the opportunity to face Dean Ambrose at SummerSlam, and Ziggler emerged victorious. Even though Wyatt was injured during the match, that apparently won’t prevent him from remaining a vital player going forward, as WWE.com speculates he may spark further mayhem tonight.

We should also expect to see more drama between Raw and SmackDown, if last night’s Raw is any indication. On August 8th, Daniel Bryan showed up to discuss the recent feud between Randy Orton and Brock Lesnar, which has caused the brand split to go out the window. Bryan and Foley were in the middle of an argument when Rusev showed up, so presumably that drama will continue this evening. Might Foley make an appearance the way Bryan showed up on Raw?

WWE.com‘s preview also implies we might hear more this evening about potential new SmackDown titles. While on the WWE Network’s Talking Smack last week, Daniel Bryan implied a tag team title for SmackDown might be created, and he just so happened to say that while in the presence of American Alpha.

Also scheduled for this evening is that match between Heath Slater and Rhyno, which will determine whether Slater gets signed to SmackDown. Plus, hopefully some progress can happen in the women’s division without Eva Marie faking an injury again.

It all goes down tonight at 8:00 p.m. Eastern on the USA Network.

Read More
WWE, WWE Smackdown
Tonight on SmackDown, the tensions between Dolph Ziggler and Dean Ambrose, as well as between Mick Foley and Daniel Bryan, continue. Get the spoilers here.