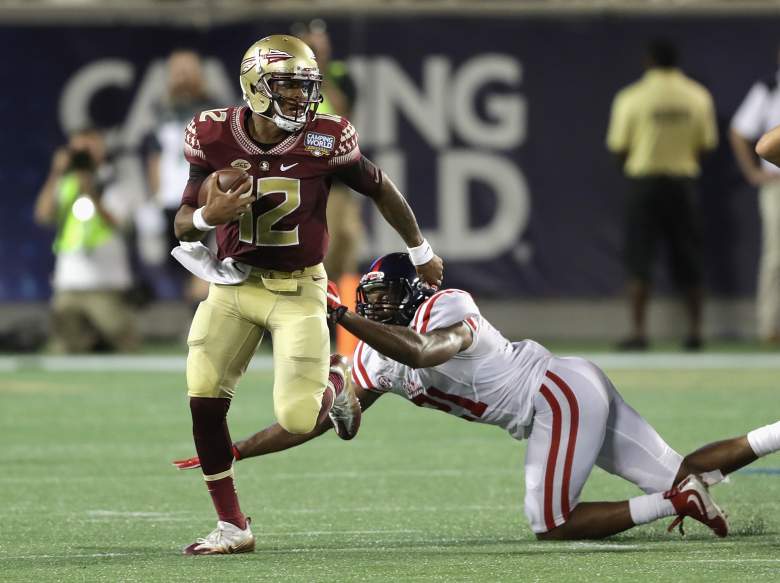 Deondre Francois had quite the debut against Ole Miss. (Getty)

It looked like it was not going to be Florida State’s night then the third quarter happened. Florida State rattled off 30 straight points to achieve the biggest comeback victory in school history.

The Seminoles defeated Ole Miss 45-34 in a stunning turn of events. After a rocky start, freshman quarterback Deondre Francois came up huge in his first college football game of his career. Francois was 33-of-52 for 419 yards and two touchdowns. He also had nine rushes for 59 yards.

For Ole Miss, it was a tale of two halves. After a hot start, the Rebels gave up two early turnovers to start the third quarter and were never able to truly respond to Florida State’s comeback. Ole Miss quarterback Chad Kelly was 21-of-39 for 313 passing yards, four touchdowns and three interceptions.

Here’s how Florida State came up with the comeback victory.

Kelly got the Rebels going on their opening drive. He took Ole Miss the length of the field and connected with receiver Damore’ea Stringfellow on a slant route for the first touchdown of the game. Ole Miss jumped out to a 7-0 lead.

D.K. Metkalf Came up With an Incredible Touchdown Catch

True freshman wide receiver D.K. Metkalf not only got playing time for Ole Miss, but had an amazing touchdown catch. Metkalf saved a potential interception by tipping the ball in the air and making the catch.

Evan Engram Started Fast & Came Up With a Touchdown

Kelly looked to his tight end Evan Engram early and often. He connected with Engram for the third touchdown of the game for Ole Miss as they jumped out to a massive lead on Florida State to start the game.

In a remarkable turn of events, Florida State started the second half red-hot. Francois began using his legs as the Seminoles scored two touchdowns and forced two turnovers to start the third quarter. The Seminoles went up 29-28.

Francois found Ryan Izzo in the back corner of the endzone off a play-action fake. The touchdown meant Florida State had gone on a 30-0 run counting the late second quarter touchdown and the flurry of scoring in the third quarter.

After a dreadful third quarter, Ole Miss stopped the bleeding with a quick, 47 second scoring drive. Kelly connected with Van Jefferson on a 20-yard touchdown pass. They were not able to convert the two-point conversion as the Rebels came withing five points of the Seminoles.