Pakistan clinched their three-match T20 International series against West indies with a second decisive victory in as many days, winning by 16 runs on Saturday to take the definitive 2-0 lead over the World Cup champions — who played the series without several of the top stars who led them to that triumph in April.

The final totals were 160/4 for Pakistan, with a response of 144/9 for West Indies. Shohail Tanvir took three wickets for just 13 runs while Pakistan Captain Sarfraz Ahmed recorded 46 not out to win the Man of the Match Award.

“It’s just disheartening, We just didn’t come to the party, we didn’t turn up,” said West Indies Captain Carlos Braithwaite. “It was a trial by spin and we failed.”

After West Indies, looking to avoid a repeat of Friday’s first-inning collapse, won the toss and elected to bowl. But chasing made little difference for the visitors, after Pakistan methodically set an impressive target of 161 in the first innings of the second T20 International between the two nations at Dubai International Cricket Stadium on Saturday.

But the opening power play of their chase proved a disaster for West Indies, scoring only 20 in the six overs while seeing three wickets fall.

As West Indies began their chase, both Johnson Charles and Evin Lewis fell victim to left-arm spinner Imad Wasim and right-arm spinner Tanvir, who took the two wickets within the first four overs.

But by just past the midpoint of their innings the situation had grown even more bleak for the West Indies, standing at 54 for four after 11 overs, after Mohammad Nawaz bowled Dwayne Bravo cleanly on the final ball of the 10th over. Tanvir also took a second wicket, getting Marlon Samuels to feather the ball back to Sarfraz on the fourth ball of the fifth over.

Absolutely brilliant over by Nawaz and he gets rid of the experienced Bravo on his last ball.#PakvsWIhttps://t.co/xNfeY8EkyZ pic.twitter.com/m5Al3xXdGI

The 15th over, bowled by Pakistan pacer Hasan Ali, may have proved decisive is sealing a victory for the hosts. While Ali surrendered 11 runs off the over, including a six on the first ball by Darren Fletcher, the 22-year-old made a statement on the very next delivery, knocking over the stumps to send Fletcher back to the dugout.

Just three balls later, Ali fooled Kieron Pollard with a slower bouncer that had the veteran flail at the ball only to nick a top edge, easily caught by Sarfraz, leaving West Indies at just 87 with only four wickets in hand and 30 balls to go.

After conceding a six by Fletcher, Hasan Ali cleans him up on the next delivery!#PakvsWIhttps://t.co/xNfeY8EkyZ pic.twitter.com/x1hiHZYVpw

In the 16th over, Tanvir struck again, dismissing Nicholas Pooran on a soft line drive to the deep where it was taken by Nawaz, leaving West Indies at 93 for 7.

Tail-enders Sunil Narine and Jerome Taylor provided some nervous moments for Pakistan, with Narine in particular swinging freely to score 30 off of just 17 balls, including a six and four fours. But West Indies finished at 144 for nine.

In the first innings, led by a 46 not out stand from 29-year-old captain — and wicketkeeper — Ahmed, Pakistan batted for the full 20 overs, losing only four wickets. Pollard was able to dismiss Pakistan strongman Shoab Malik, inducing him to hit a soft shot into the air on a line to Dwayne Bravo.

But Malik had already posted 37 and the his wicket did not fall until Pakistan had just four balls left to face.

Things got off to a promising start for the Windies when Samuel Badree took the wicket of Sharjeel Khan in the first over, but things got more difficult from there.

The average first innings T20I total at Dubai is just 139, and of 12 first innings of at least 150 posted there, 10 times the team batting first has won the game. 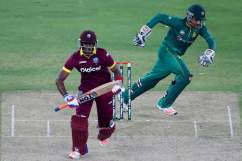