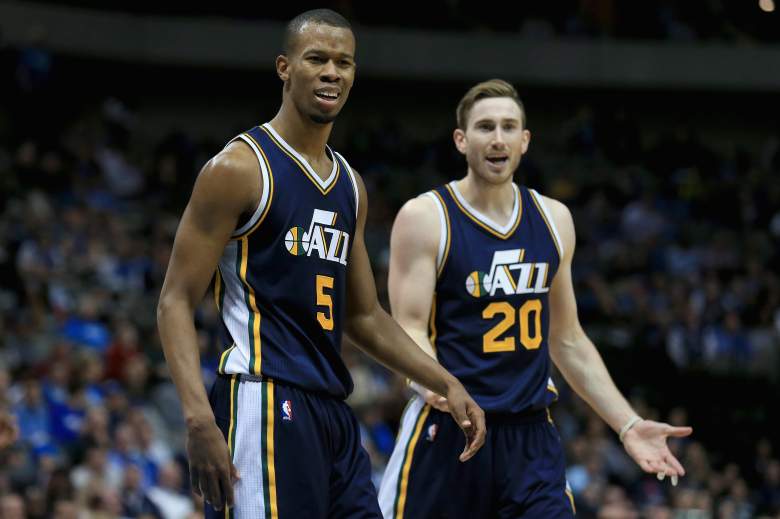 Despite having not reached the playoffs since the 2011-12 season, the Utah Jazz entered training camp with high expectations. Hit hard by injuries last season, beginning with guard Dante Exum tearing the ACL in his left knee while competing for Australia last August, Utah just missed out on a playoff berth as Houston passed them for the eight seed in the final week of the regular season. Now healthy, Quin Snyder’s team is expected to not only be a playoff team but compete for the Northwest Division title. And if everyone remains healthy, a run at a division title is not an unrealistic goal for the Jazz.

G: George Hill (12.1 ppg, 4.0 rpg, 3.5 apg) With Exum out for the season getting consistent point guard play was an issue for Utah last season. To address that issue the Jazz were involved in a three-team deal in which their first round pick (Taurean Prince) went to Atlanta, with the Hawks sending point guard Jeff Teague to Indiana and the Pacers sending point guard George Hill to Utah. Hill’s in a contract year, and as the Jazz look to bring Exum back slowly the veteran point guard will handle the starting duties.

G: Rodney Hood (14.5 ppg, 3.4 rpg, 2.7 apg) Hood was one of two Jazz to start in at least 79 games last season, with Hayward being the other. Hood averaged nearly six point per game more than he did as a rookie, taking advantage of the additional scoring opportunities. With the Jazz back to full strength, the additional weapons on the roster should help Hood be a more efficient option at the shooting guard position.

F: Gordon Hayward (19.7 ppg, 5.0 rpg, 3.7 apg) Hayward started all 80 games he played in last season, with he and Hood being the only Jazz players to start every game they played in. At 34.9 percent Hayward isn’t a great three-point shooter, but he’s good at finding his spots in the mid-range area and getting to the basket off the dribble as well. Like Hood, other key scorers getting healthy should only help Hayward when it comes to the ease of finding quality shots. Hayward’s currently out with a finger injury, but the hope in Utah is that they have enough depth to account for his absence.

F/C: Derrick Favors (16.4 ppg, 8.1 rpg) Favors played in 62 games last season, with a back injury partially responsible for the 20 games he missed. Favors shot 51.5 percent from the field and was one of Utah’s best offensive rebounders with only Gobert averaging more than Favors’ 2.7 offensive rebounds per contest (Favors was third in offensive rebound percentage).

C: Rudy Gobert (9.1 ppg, 11.0 rpg, 2.2 bpg) Gobert is one of the best defenders in the NBA, as he not only cleans up on the defensive glass but he also blocks shots and alters many others. Gobert’s contract will be one of the key subplots this season for the Jazz, with the 7-foot-1 center from France in the final guaranteed season of his contract. The two sides have until October 31 to negotiate a contract extension, and should something not be worked out Gobert will be a restricted free agent next summer. 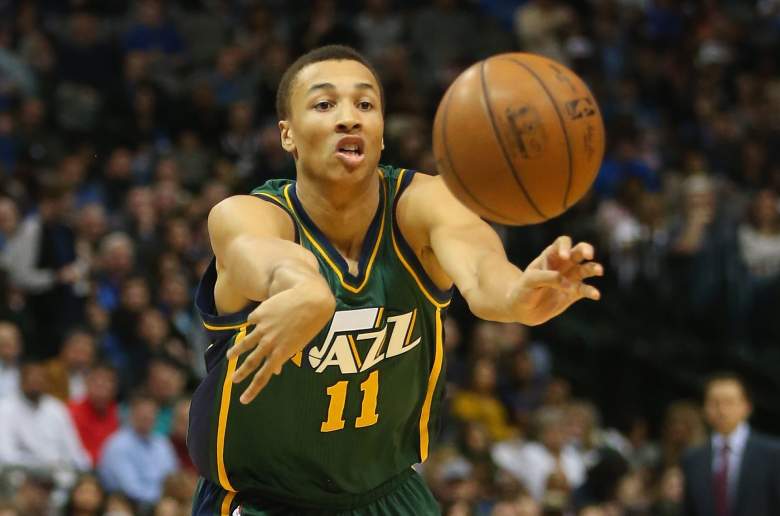 G: Dante Exum (4.8 ppg, 2.4 apg in 2014-15) As noted above Exum is coming off of a torn ACL that ended his 2015-16 season before it even began. At 6-foot-6 Exum has the size that in recent years has been valued when assessing point guards, and the addition of Hill means that the Australian won’t have to rush through the process of getting back onto the court. Exum said earlier this week that he’s ready to go, but Utah isn’t going to rush a player who’s incredibly important to the franchise’s future.

G: Alec Burks (13.3 ppg, 3.5 rpg, 2.0 apg) Burks has played in just 58 games over the last two seasons, with a shoulder injury ending his 2014-15 season and a fractured left fibula ending his 2015-16 campaign nearly a year to the day after the shoulder injury. When healthy Burks is a valuable bench scoring option, but for some reason there are those who ask if the Jazz should look into moving Burks.

G: Raul Neto (5.9 ppg, 2.1 apg) Neto, a solid but not spectacular point guard, made 53 starts and played in 81 games for the Jazz last season. With Utah addressing its issues at the point both late last season (acquiring Shelvin Mack) and during the summer (Hill), and Exum returning to the court, Neto’s minutes will likely decrease in 2016-17.

F/G: Joe Johnson (12.2 ppg, 3.6 rpg, 3.9 apg) Johnson split time between Brooklyn and Miami last season, joining the Heat late in the year and being a rotation player during the playoffs. Johnson shot nearly 44 percent from the field last season, and while the nickname “Iso Joe” has stuck with Johnson this is a team where the ball should move around well given the number of capable scorers. Johnson agreed to a two-year deal worth $22 million this summer, with both years of the contract being guaranteed. And with Hayward injured, Johnson would be a good choice to slide into that starting role on the wing for the time being.

F: Joe Ingles (4.2 ppg, 1.9 rpg) The 6-foot-8 Ingles shot just over 38 percent from three last season, and his value to the Jazz is as a perimeter shooter. With the number of playmaking guards on the roster, a spot-up shooter such as Ingles stands to benefit on the offensive end of the floor.

F: Trey Lyles (6.1 ppg, 3.7 rpg) Lyles played in 80 games as a rookie last season, with the various injuries resulting in his starting 31 of those games. At 6-foot-10 Lyles has good size for the power forward position, and with his offensive skill set Lyles is capable of scoring both inside and out for the Jazz.

C/F: Boris Diaw (6.4 ppg, 3.1 ppg, 2.3 apg) After four-plus seasons with the Spurs, Diaw was traded to Utah during the offseason. When fully engaged Diaw can be a tough matchup due to his abilities as a passer, but when that isn’t the case (see his stint in Charlotte) it can get ugly. The motivation of playing with a team expected to make the playoffs should be enough to keep Diaw in the flow on a consistent basis.

Other Players in Jazz Training Camp 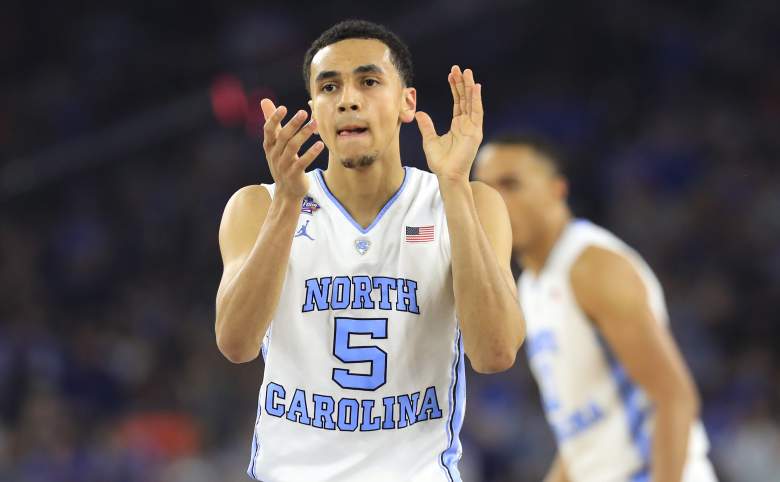 
Utah has 14 guaranteed contracts in camp, including a point guard in Mack who helped stabilize the position last season and a rookie power forward in Bolomboy who’s incredibly active on both ends of the floor and can help the Jazz as a rebounder and defender. Paige and Ford, with the latter being day-to-day after suffering a head injury in practice Wednesday, are two of the long shots to make final roster.

The same can be said for Dawson, with Johnson, Withey and Sims looking to latch onto a roster that doesn’t lack for big men provided everyone stays healthy. It should be noted that Utah does have a D-League affiliate, so some of the younger players without guaranteed deals could be headed there towards the end of training camp.

UPDATE (10/13): The Jazz announce that they have waived Marcus Paige, Quincy Ford and Eric Dawson.

UPDATE (10/21): The Jazz announce that they have waived center Henry Sims.

UPDATE (10/23): The Jazz announce that they have waived forward Chris Johnson.

Read More
Basketball NBA, NBA, Utah Jazz
Utah's been a trendy pick to go from the lottery to the playoffs, as they missed out on the postseason after faltering down the stretch.