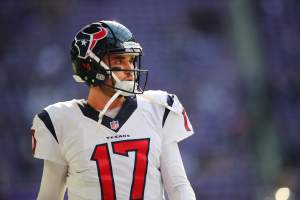 The AFC South takes center stage Sunday night when the Texans host the Colts in primetime.

With the Texans leading the division at 3-2, they playoff race is always looming when these teams meet. The division has been historically dominated by the Colts, but the Texans won the division last year with a 9-7 finish.

Kickoff is set for 8:30 p.m. Eastern and the game will be televised by NBC. As usual, Al Michaels will be joined by Chris Collinsworth in the booth.

The Colts made some history last week, becoming the first NFL team to play one week after appearing in London instead of taking the bye week. A victory at home over the Bears last week may change the way teams set their schedule in the future.

After a solid start under Brock Osweiler, the Texans have dropped two of their last three. The offense was dominated last week against the undefeated Vikings, and DeAndre Hopkins has just six catches in his last two outings.

Here are the details for tonight’s game:

Read More
NFL, TV
The Texans look to maintain their AFC South lead when they host the Colts on Sunday Night Football.