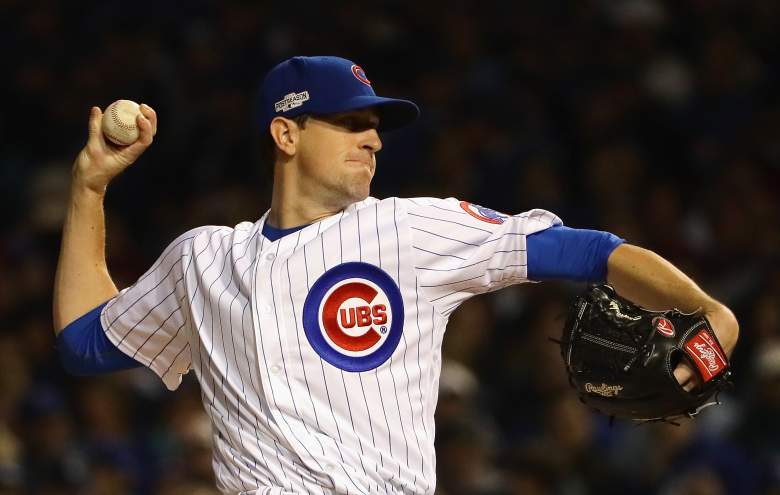 Faced with the task of pitching the Chicago Cubs into their first World Series since 1945, against one of baseball’s best pitchers in Clayton Kershaw, Kyle Hendricks rose to the occasion in Game 6 of the National League Championship series as the Cubs won by the final score of 5-0.

After giving up a leadoff single to Andrew Toles, Hendricks was dominant against the Los Angeles Dodgers lineup and through seven innings faced the minimum number of batters (21). Toles’ hit was the only one that the Dodgers would get, with a Javier Baez error in the second inning giving the visitors their second baserunner in Josh Reddick.

Through seven innings Hendricks threw 82 pitches (54 strikes) and struck out six batters. After a Reddick single to center field with one out in the eighth inning manager Joe Maddon removed Hendricks from the game, with the Wrigley Field crowd giving the Dartmouth product a standing ovation.

Closer Aroldis Chapman faced just one batter in the eighth, with pinch hitter Howie Kendrick hitting into a 4-6-3 double play to end the inning. Hendricks threw 88 pitches, with 57 being strikes (six strikeouts, no walks), through 7 1/3 innings. With Chapman recording the final five outs, he and Hendricks faced the minimum number of batters (27) Saturday night.

The @Cubs FACE THE MINIMUM.

Only other club to do it in a #postseason game? The @Yankees in Don Larsen’s 1956 perfect game. pic.twitter.com/9w8L8LsdEo

Hendricks gave up just one run in his first NLCS start, a 1-0 loss to the Dodgers in Game 2 with Kershaw being the opposing pitcher.