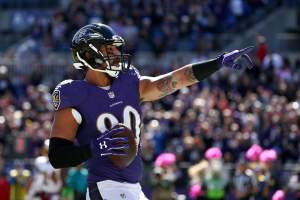 The Giants got two huge touchdowns from Odell Beckham and stopped the Ravens offense late to win 27-23 and snap a three-game losing streak.

After a sluggish start for the Giants, Eli Manning found Beckham for two long scoring plays, both of which resulted in Beckham interacting with the kicking net on the sidelines. The Giants defense struggled, but stopped Joe Flacco in the final seconds to preserve the lead.

After the Giants got their first lead late in the second half, the Ravens seemed to retake the momentum on a long pass to Mike Wallace. But the Giants defense stuffed the Ravens on fourth and goal, keeping the game within reach for Manning and the offense.

The Giants are now off to London, where they will play the Rams at Twickenham Stadium. The Ravens will be in the exact same stadium next week when they visit the Jets.

Keep reading to see the game stats and highlights:

Baltimore Got a Big Gain Early From Perriman

Flacco stands in and delivers on third down. Perriman makes 41-yard catch.

Breshad Perriman sat out his entire rookie year for the Ravens, but he’s working his way into the offense as a deep threat. On third and long Flacco launched a jump ball to Perriman, who beat the coverage for a 41-yard gain.

Beckham’s Fumble Gave it Right Back to Baltimore

The Ravens offense didn’t rest for long, as the Giants lost their seventh fumble of the season. Baltimore didn’t waste any time, finishing the drive with a one-yard TD run from Terrence West.

The Giants offense didn’t find their rhythm until late in the first half, when Manning found rookie Roger Lewis for a 24-yard hookup to get his team on the scoreboard.

On a 3rd & 1, Manning throws a pick. Something else. Third turnover of the afternoon for the home team. Ravens are set up.

The Giants are barreling towards the league’s worst turnover margin, adding another three this afternoon. Sterling Shepard is bumped to the ground by Tavon Young, who steps in front for the pick.

The Giants have their first lead of the afternoon, as Beckham raced past the coverage untouched for the score. It’s been a rough afternoon for Beckham, who lost a fumble and exited action briefly with a hip injury.

Flacco to Wallace on a deep throw + a face mask puts us in the redzone.

Ravens answer: Joe Flacco to Mike Wallace for about 70 yards … and a penalty on the Giants added on to that.

Joe Flacco responded immediately, hitting a streaking Wallace to put the Ravens back in business. Janoris Jenkins brought Wallace down by his facemask, adding an additional 15 yards.

Baltimore looked ready to punch it in, but were stuffed on fourth and goal by the Giants defense.

The Ravens Re-Take The Lead With Two Minutes Remaining

The Ravens march down the field to go ahead late, and Terrence West caps the nine-play drive with his second TD.

And that's why you put up with Odell Beckham's crap.

Odell Beckham Jr just proposed to the net after another long TD, and it said yes ? pic.twitter.com/FXjfCc8VnK

Beckham gets loose again! Two Ravens defenders bump into each other, and Beckham takes advantage of the space and outraces the defense for a 66-yard TD.

The Giants look to snap a three-game losing streak Sunday when they host the Ravens. New York started their campaign strong under new head man Ben McAdoo, but all optimism after the team’s 2-0 start has faded.

McAdoo is an offensive coach, but his team has struggled on defense this season. The Giants are last in the NFL with just four sacks to start the season, and have forced only three turnovers through five games.

The Ravens have also lost consecutive games after a strong start, and have lost their last two by a combined seven points. In fact, every game the Ravens have played this season was within one score, as the team has been unable to put teams away to start the season.

It doesn’t get easier for Baltimore, as the team could be missing key starters for on offense. Steve Smith is dealing with an ankle injury, two starters on the offensive line are injured, and C.J. Mosley missed Friday’s practice nursing a hamstring injury.