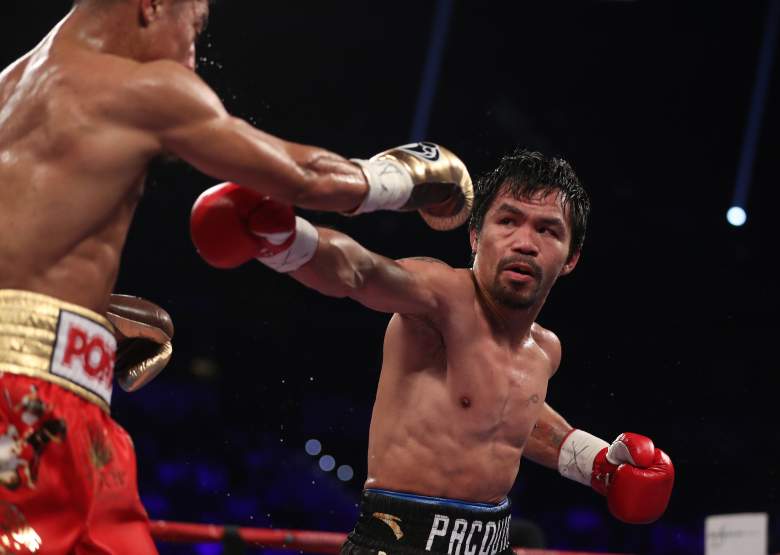 There’s a new WBO world welterweight champion, and his name is Manny Pacquiao.

Pacquiao defeated Jessie Vargas, who entered the fight as the champion, by unanimous decision at the Thomas and Mack Center in Las Vegas, Nevada Saturday night. Pacquiao, who knocked down Vargas late in the second round, won comfortably on two of the three cards. Glenn Feldman and Glenn Trowbridge both scored the fight 118-109 in Pacquiao’s favor, with Dave Moretti scoring the fight 114-113 for Pacquiao.

With the win Pacquiao now has a career record of 59 wins (38 knockouts), six losses and two draws, with Vargas dropping to 27 wins (ten by knockout) and two defeats. Vargas, who defeated Sadam Ali in March to win the WBO welterweight title, has lost two of his last three bouts with the other defeat coming against Timothy Bradley Jr. Bradley was a commentator for Saturday’s bout for Top Rank Boxing, and other boxing luminaries were in attendance as well.

Floyd Mayweather watched the fight from ringside, as did undefeated WBO super lightweight champion Terence Crawford. Crawford will be back in action December 10 when he defends his belt against John Molina Jr. If Crawford wins that bout, next up for him could very well be Pacquiao.

After getting knocked down in the second it took a couple rounds for Vargas to get back into the fight, ultimately managing to hold his own during the middle rounds. But down the stretch he lost some steam, with the still-energetic Pacquiao managing to take advantage of Vargas’ mistakes. Needing a knockout in the final round, Vargas simply did not have the energy required to pull off what would have been a significant upset.

Two-time Olympic gold medalist Zou Shiming moved his career record to nine wins and one loss with a win by unanimous decision over Prasitsak Phaprom in a fight that wasn’t all that close. Shiming won 120-107 on two cards (Don Trella and Tim Cheatham) and 119-108 (Robert Hoyle) on the third in becoming the WBO World Flyweight champion. Ringside stats had Phaprom (39-2-2) throwing more than 500 punches, but Shiming was the far more active fighter throughout the 12-round bout.

Shiming, who took bronze in the light flyweight division at the 2004 Summer Olympics in Athens, Greece, won gold in the division in both 2008 in his home country of China and in 2012 in London. Th 35-year old Shiming turned pro in 2013, with his first professional bout coming in April of that year.

While social media leaned heavily in favor of Donaire with regards to who won this fight, the judges (and analysts calling the fight) disagreed as Las Vegas native Jessie Magdaleno won the WBO world super bantamweight title by unanimous decision. Magdaleno won the fight 116-112 on two scorecards (Burt Clements and Steve Weisfeld), with the third (Adelaide Byrd) offering up a shocking 118-110 score given how close the fight appeared to be. Magdaleno threw more punches, with 500 according to the Top Rank stats to Donaire’s 404, but he landed just 31 percent of his punches to 33 percent landed for Donaire.

While scores that would have lent themselves to a close decision in Magdaleno’s favor were expected, the 118-110 score surprised many observers. Magdaleno is now 24-0 in his career, with 17 of the wins coming by way of knockout, with Donaire’s record dropping to 37 wins and four defeats.

In the final bout of the undercard, Oscar Valdez put forth an impressive performance in stopping Osawa one minute, fifty seconds into the seventh round to retain the WBO world featherweight title. Valdez, who threw powerful shots throughout the fight, knocked Osawa down in the fourth round and appeared ready to get the stoppage then. Osawa managed to finish the round, but he only delayed the inevitable.

Peppered with hard shots to the head and body while on the ropes in the seventh, Osawa was rescued by referee Vic Drakulich who decided that the challenger had taken enough punishment. With the win Valdez is now 21-0 in his young career, with 19 of the wins coming by way of knockout. 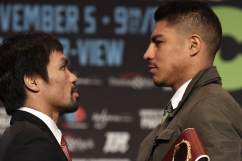 Pacquiao vs. Vargas Live Stream: How to Watch Online