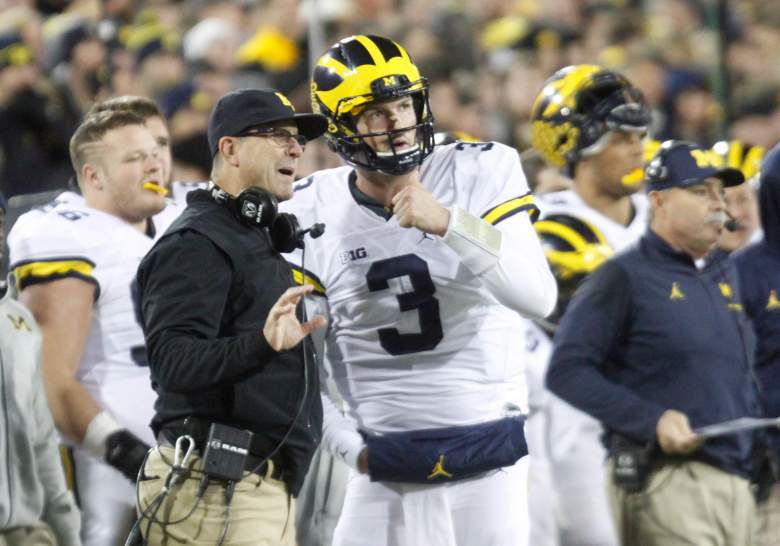 Michigan starting quarterback Wilton Speight is out for the remainder of the regular season with a broken collarbone, mgoblog reported Monday afternoon. Speight was reportedly injured during the fourth quarter of Michigan’s upset loss to Iowa on Saturday.

Speight could return for a Michigan bowl game, depending on “the exact nature of the issue,” according to the report. Speight’s absence would be a huge hit for Michigan. Speight has completed 160 of 257 passes for 15 touchdowns and 4 interceptions this season.

Earlier on Monday, Michigan coach Jim Harbaugh said during his press conference that Speight could be a game-time decision for Saturday’s game against Indiana.

“It’s going to depend on how he feels,” Harbaugh said. “Could be a [game-time decision]. We will know based on what the doctors say and how Wilton’s feeling.”

Harbaugh said seniors John O’Korn and Shane Morris would get the bulk of practice reps this week. O’Korn, who was in a position battle with Speight before the season started, seems to be the frontrunner. O’Korn, a Houston transfer, was the 2013 American Athletic Conference rookie of the year. He started 16 games in his two seasons with the Cougars— throwing for 3,117 yards and 28 touchdowns as a freshman. However, O’Korn lost the Cougars’ starting job to converted wide receiver Greg Ward Jr. last season. O’Korn has completed 13 of 18 passes for 114 yards and two touchdowns in 2016. Morris is 4-for-5 for 45 yards.

If O’Korn does get the start for the remainder of the season, he has a strong offense to back him up, including one of the top tight ends in the country, Jake Butt.

“If John’s (O’Korn) number is called, we’re fully confident in him,” Butt told Land of 10. “We’ve seen what he has since he’s been here, and we’re confident with him.”

Read More
College Football, Football, Sports
Michigan starting quarterback Wilton Speight is reportedly out for the rest of the regular season. Who will start in his place?