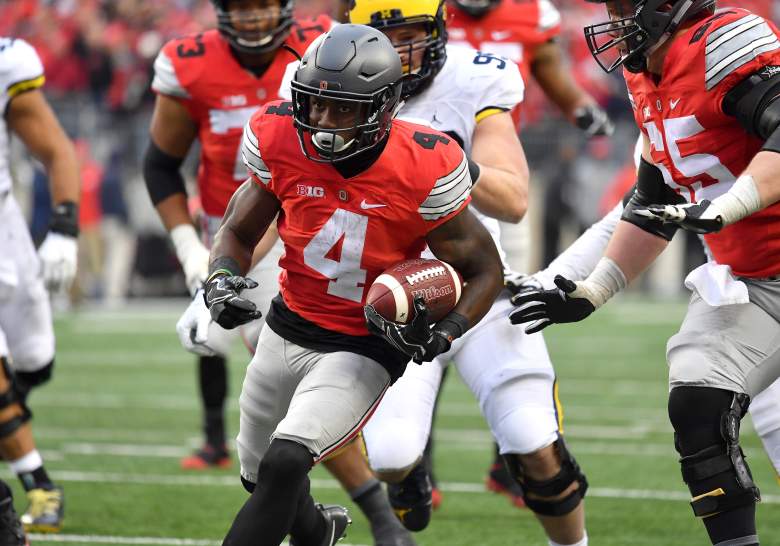 Curtis Samuel is one of the top running back prospects eligible to enter the 2017 NFL Draft. (Getty)

NFL fans tuning in to the College Football Playoff will see quite a few prospects for the upcoming draft. Click here if you are looking for Heavy’s latest NFL mock draft. It is important to note that with the exception of Deshaun Watson, none of the underclassmen discussed here have officially declared for the draft. The Clemson-Ohio State game features a number of marquee players to watch.

Curtis Samuel is Ohio State’s version of a Swiss Army Knife. While Samuel is listed as a running back, he is similar to a Percy Harvin type player. Samuel is active in the passing game and had more passing yards than rushing yards in 2016. He rushed for 704 yards and 8 touchdowns. Additionally, he had 822 receiving yards and 7 touchdowns.

Samuel is likely fighting to be the third running back taken behind Leonard Fournette and Dalvin Cook. He has not confirmed whether he will enter the draft or come back to Ohio State for another season.

Ohio State quarterback J.T. Barrett would likely be fighting to be a late-round selection if he decided to enter the draft.

For Clemson, quarterback Deshaun Watson steals the headlines, but he has plenty of surrounding talent including wide receiver Mike Williams. Watson’s range has been all over the map by draft experts. In Heavy’s latest mock draft, we have Watson going to the San Francisco 49ers with the second overall pick. ESPN’s Todd McShay has Watson falling outside of the first round.

Mike Williams has a good chance to be the top wide receiver selected in April. Heavy has Williams going fifth overall joining Marcus Mariota and the Tennessee Titans. Williams had 84 receptions, for 1171 yards and 10 touchdowns.

The Alabama-Washington matchup has no shortage of players on NFL teams radars. The Alabama defense is full of prospects including Jonathan Allen, Tim Williams and Reuben Foster.

Heavy has Allen going to the New York Jets at number six and Foster heading to the Cincinnati Bengals with the eighth pick.

Washington has several great players on defense including Budda Baker, but it is wide receiver John Ross that has a chance to be the highest Husky selected in the draft. Ross is a speedy wide receiver and a high 40-time at the Combine could boost his stock even more. His range goes from the mid-first to second round. McShay has Ross being selected with the 17th pick in his latest mock draft.

Ross had 76 receptions for 1,122 yards and 17 touchdowns this season. The Huskies also use Ross to return kicks and punts.

All this should lead to an exciting 2017 NFL Draft. The first round kicks off on Thursday, April 27, 2017. Sit back and watch the future of the league as you ring in the new year.