Predictions & Winners: NEW DAY BAYBEEEEEE! They managed to surpass Demolition’s record as the longest-running WWE Tag Team Champions of all time. They got through four teams in just ONE night during their record-breaking title run. During the Tribute to the Troops, Cesaro and Sheamus became the victors of a Fatal 4-Way Match and got another chance at The New Day. So here’s the thing – The New Day are an incredible unit who’ve put on great matches and hilarious promo segments. They’re the lifeblood of Raw. But it’s gotten to a point where they’ve now grown just a lil’ bit stale, so it might be time to cut their title reign short and put them on another creative path. This is why we think Cesaro and Sheamus will finally wrestle the Tag Team titles from The New Day in a shocking upset. Since The New Day already broke the tag team championship record, it makes sense for them to drop the straps and give another team the chance to have a good title run.

Predictions & Winner: Now that Zayn has finally gotten himself some much deserved Raw TV time, it’s led to one of the more underrated storylines of 2016. Braun Strowman has rode a new wave of squash matches into his new status as the Red Brand’s most intimidating competitor. Zayn has tried to prove himself against the giant, but Mick Foley has butted in from time to time to end the smaller Superstar’s punishment at the hands of Strowman. This has pissed of Zayn and led to him losing confidence in the man he once looked up to. But now, Zayn has gotten the rematch he’s wanted all along. This won’t be your usual squash match; Strowman will no doubt butcher Zayn for several moments, but Zayn will shock the world and make the most epic of comebacks. Expect Zayn to pull out an incredibly shocking win over Strowman, but you should also expect Strowman to exact quick vengeance on Zayn right after the match’s done.

Predictions & Winner: Banks did it again! She managed to rip the Raw Women’s Championship out of the grasp of Charlotte. This never ending feud has given us some of the best matches of 2016, which is why we’re not exactly tired of seeing them facing each other again. But this time, they’ll engage in a game of one-upmanship during a 30-minute Iron Man Match. We can totally see Charlotte getting a solid lead over Banks during the early portions of this title encounter. We think she’ll even get herself purposely disqualified by using a weapon on Banks, just so she can weaken her for the next pinfall/submission. But when it seems like all is lost for the champ, Banks will get a number of winning pinfalls/submissions on her score card and tie things up with her challenger. When the time limit finally runs out, Banks will be the one with that extra point over Charlotte. Banks will DEFINITELY retain here!

Predictions & Winner: Champion vs. Champion. The current US title holder will attempt to defeat Kevin Owens for his Universal Championship. Roman Reigns is set to head into this match and leave it as a double champion, while Owens is dead set on making sure he leaves Roadblock with his title intact. We’ve seen this match before, so we’re not too excited to see it go down once more. But we figure the main event spot we’re expecting them to be placed in will make them put on something better than their past work. Everyone and their grandmother should expect plenty of outside shenanigans during this title match. Jericho will run out and so will Rollins, which will lead to Owens and Reigns fighting off whomever gets in their way. Amidst all this madness, Owens will take advantage (as usual) and screw over the US Champion. Owens retains here to the surprise of no one. 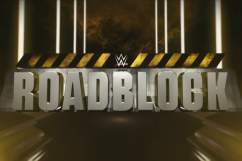 When Is WWE Roadblock: End of the Line? Date, Location & Start Time 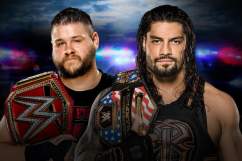 WWE Roadblock: End of the Line: The Results & Highlights You Need to Know