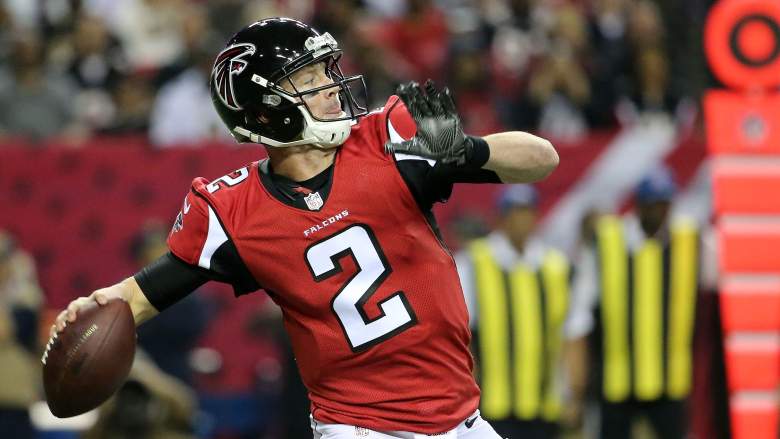 The Atlanta Falcons get a chance to avenge a Week 6 loss to the Seattle Seahawks when the teams meet in the Georgia Dome on Saturday in an NFC Divisional Round playoff game.

Kickoff is scheduled for 4:35 p.m. Eastern and the game will be televised by FOX.

Here’s a complete look at all the betting info you need to know, as well as our prediction for the Divisional Round game below:

Note: All odds and numbers courtesy of OddsShark.com and are updated as of January 13

Betting Percentages: 56 percent for the Falcons (-4)

Betting Percentages: 62 percent for the OVER

Seattle beat Atlanta 26-24 in Week 6 at home on a fourth quarter comeback. They’ve also met in the playoffs once (2013) and the Falcons won that game 30-28 in Atlanta.

The Seahawks defense hasn’t quite been the same since losing safety Earl Thomas in early December, despite holding the Lions to 6 points in the Wild-Card victory. The Falcons are a different beast offensively. In fact, they led the league in scoring (33.8 points per game).

Seattle can score some points, too. The Seahawks have put up at least 24 in four consecutive games. And the Falcons aren’t known for their defense, allowing 25.4 PPG. This one likely won’t be a typical Falcons-Saints-like shootout, but it’s not going to be a defensive battle.

So how is it going to shake out?

Matt Ryan and Julio Jones carved up the Seahawks secondary in Week 6 and that was with Thomas in the lineup. With Jones, Muhamed Sanu and (now healthy) playmaker Taylor Gabriel, the Falcons’ passing game will be at full-strength. And don’t forget about running backs Devonta Freeman and Tevin Coleman, who are above-average receivers. The two combined for just 50 yards rushing in the Week 6 meeting, but expect a heavy dose of them (including on the receiving end) on Saturday.

The Seahawks got 161 yards on 27 carries from Thomas Rawls in the Wild-Card game vs. Detroit. They’ll need another strong effort from the running game to control the clock and keep Ryan and Co. off the field. That can be done against the Falcons, who are a middle-of-the-pack rush D.

But you can also expect to see Russell Wilson air it out often, especially in the direction of Doug Baldwin and Jimmy Graham, as Atlanta has struggled to defend the tight end. Seattle’s offensive line can be a sieve with Wilson getting sacked 41 times in the regular season and 3 more visits to the turf in the playoff game. They’ll have to know where Atlanta linebacker and NFL sack leader Vic Beasley Jr. (15.5 sacks) is at all times.

In the end, the Falcons offense and home field advantage is going to be too much for the Seahawks, who have been beaten up by top quarterbacks lately. Atlanta gets revenge for the Week 6 loss and gets into their first NFC Championship since 2013.

Check out Vic Beasley's Top 10 Plays of the Season! https://t.co/3hy4VE9oQp 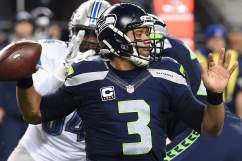 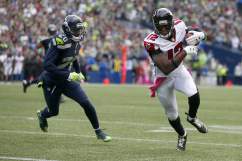 Read More
Atlanta Falcons, Football, NFL, Seattle Seahawks
A trip to the NFC Championship Game is on the line when the Falcons host the Seahawks on Saturday. Click here to see the game's odds and our prediction.