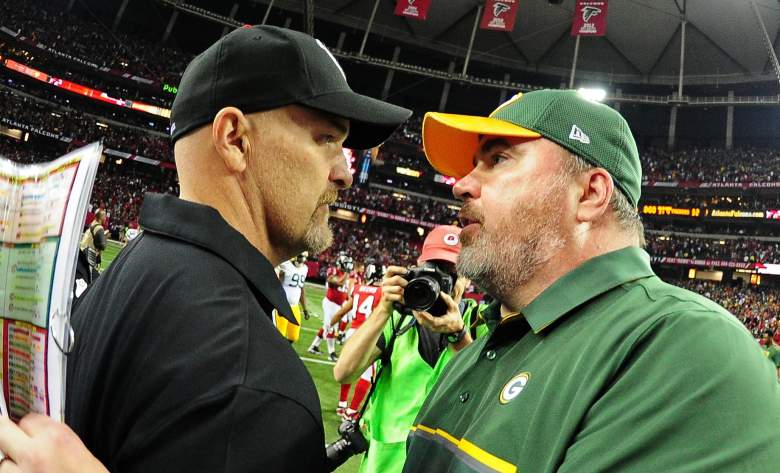 What Green Bay Packers coach has the most postseason wins in franchise history?

The answer: Mike McCarthy. With Sunday’s 34-31 victory over the Cowboys, McCarthy notched his 10th playoff win as the head coach. Lombardi has the best winning percentage at 9-1 (.900) and Holmgren’s is .643 (9-5), but McCarthy has the most Ws.

McCarthy will go for No. 11 this Sunday when the Packers visit the Atlanta Falcons for the NFC Championship Game.

On the other sideline, also trying to get his squad to the Super Bowl, will be Dan Quinn, head coach of the Falcons.

Quinn has been at the helm for only two seasons. Last week’s Divisional Round game against the Seahawks was his first postseason appearance as a head coach. Quinn and Co. got the job done with a 36-20 victory over Seattle.

Quinn’s Falcons defeated McCarthy and the Packers 33-32 in Week 8 during the regular season. To say the stakes are higher Sunday would be a gross understatement.

On Sunday, Mike McCarthy surpassed Vince Lombardi & Mike Holmgren for the most playoff wins by a Packers head coach in team history! pic.twitter.com/TBzeZ0t6Rq

Ahead of Sunday’s game, get to know the head coaches a little bit better:

Family: Married wife Jessica Kress in March 2008. The couple has two daughters — Gabrielle (8) and Isabella (5). McCarthy has a daughter (Alexandra) from a previous marriage and two stepsons — Jack and George.

Mike McCarthy is going to his fourth NFC Championship.in 11 years.

College: Salisbury State, a Division III school in Maryland. He was a defensive lineman from 1990-93 and a member of the Track & Field team (hammer throw).

Family: His wife is Stacey and the couple lives in Suwanee, Georgia.