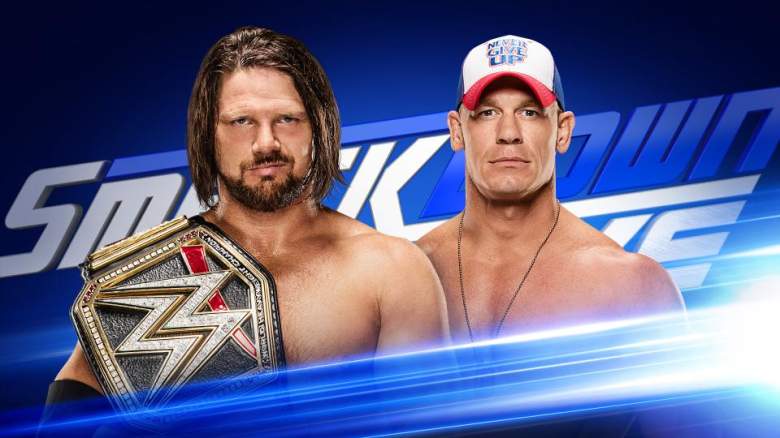 AJ Styles and John Cena will fight for the WWE World Championship at ‘Royal Rumble.’ (WWE.com)

SmackDown Live is currently airing a new episode on the USA Network. Here are all of the match results and spoilers you need to see, presented in reverse chronological order. Check back in throughout the show for further developments.

9:41 – Dean Ambrose defeats The Miz and becomes the new Intercontinental Champion. The match nearly ends in a disqualification when Maryse slaps Dean Ambrose at ringside. But Ambrose convinces the referee not to disqualify him and to instead ban Maryse from the arena. A few minutes later, Ambrose pins The Miz and takes the title.

9:34 – Backstage, Dean Ambrose says he’s going to take away the most important thing in the world to The Miz: the Intercontinental Championship.

Natalya then declares that she is better than her uncle, Bret Hart, ever was, and no one works harder than she does. On the other hand, she says that Nikki Bella is only where she is because of how she looks. But beauty fades, and when her beauty fades, John Cena is going to leave Nikki Bella and she will die alone, Natalya says. This sets Bella off, and she punches Natalya in the face, leaving her injured in the ring.

9:22 – American Alpha defeats Breezango in a match lasting less than one minute. After the match, The Wyatt Family appears on video, telling them that nothing lasts forever and they should cherish this moment while they still can. They haven’t really won anything yet, Bray Wyatt tells American Alpha, saying that the Wyatt Family’s loss has only made them stronger, and they’re coming to reclaim what is rightfully theirs next week.

9:15 – Carmella defeats Aliyah, an NXT performer, in part thanks to the help of James Ellsworth.

9:11 – Backstage, Maryse tracks down Renee Young and slaps her across the face, telling her to never touch The Miz again.

8:51 – Daniel Bryan enters. He welcomes the audience to the contract signing for the World Championship match at Royal Rumble.

John Cena enters, followed shortly by AJ Styles. Styles asks why they’re doing this; he takes issue with the fact that Cena has been off television for months, yet he gets a title match the moment he gets back. Daniel Bryan says that SmackDown Live is on a roll, as they beat Monday Night Raw in the ratings last week for the first time ever. That was in part because John Cena made his return, and they need to keep that momentum going until Royal Rumble. They need to do that by giving the fans the biggest match possible: AJ Styles vs. John Cena, the match that everyone wants. Plus, Bryan adds, Styles shouldn’t have a problem with this since he already beat Cena three times.

AJ Styles tells John Cena that he is the luckiest man on the planet and he has been gifted a title match from a guy who is basically his brother in law. But Styles agrees putting on this match is what’s best for SmackDown. Styles says that if Cena doesn’t win this, he doesn’t belong in the WWE anymore. Also, Styles says that SmackDown is doing well right now because he’s champion, not because of John Cena. “We can do it without you, John,” Styles says.

Cena says he has a lot of respect for AJ Styles. Styles tells him to stop with the respect nonsense, saying that Cena is just trying to cover his tracks. Styles adds that everything John Cena once said about The Rock is now true about him. But what’s sad is that Cena will never be as good as The Rock, and he will never be as good AJ Styles, Styles says. With that, he signs the contract.

Cena says that part of being a man is being able to admit you were wrong and apologize. But another part of being a man is pushing back when someone goes over the line. “You just made the biggest mistake of your life,” he tells Styles. “You pissed off John Cena.” Cena says that he does need a win to prove he already belongs because chumps like Styles are making people believe he already left. Cena says he has now lost any respect he ever had for Styles, declaring that he’s nothing more than “a punk little bitch.” Cena has passion for what he does, unlike Styles; Styles walks into the ring every night because he has to, but Cena does it because he wants to, Cena says. Cena concludes that anyone else in his shoes would have already left the WWE for Hollywood, but he’s still here.

Finally, Cena says AJ Styles is no different from all of the other people who have tried to knock him down, the people who on their best day could never be him. Cena signs the contract, and the match is made official.

Baron Corbin enters. He makes it known that he is the first SmackDown Live superstar who is not only entering the Royal Rumble match but is winning it and leaving it WWE World Champion. Cena and Corbin are about to fight when AJ Styles attacks John Cena and leaves him lying in the ring injured. Baron Corbin tells John Cena his time is up and then leaves the ring.

8:43 – Becky Lynch defeats “La Luchadora” by submission. At the end of the match, Lynch unmasks her opponent and reveals that it is Alexa Bliss. But then another person also dressed in the identical La Luchadora costume attacks Becky Lynch from behind. The identity of this second person is not revealed.

8:36 – Backstage, Dolph Ziggler storms into the locker room extremely upset. Everyone wants to know why he attacked Kalisto, with Apollo Crews being particularly annoyed by Ziggler’s behavior. Ziggler immediately begins attacking Crews, and the fight has to be broken up.

8:35 – Backstage, James Ellsworth approaches Carmella. He tries to wish her luck in her match tonight, but he’s so nervous he can barely get through the words. He also takes off his shirt and gives it to her as a gift. She asks him to escort her to the ring for her match.

8:13 – Baron Corbin defeats Dolph Ziggler. After the match, Corbin grabs a chair and prepares to beat up Ziggler some more. Before he has a chance, Kalisto runs out to protect Ziggler. Instead of showing his thanks, though, Ziggler snaps and attacks Kalisto, screaming, “I don’t need anyone!”

8:00 – The Miz enters, accompanied to the ring by Maryse. He says that they are the “it” couple and that the Intercontinental Championship is the most prestigious title in the WWE. Therefore, the Miz says he only has one New Year’s resolution: to be more forgiving. And it just so happens there’s someone who owes him an apology: Renee Young. SmackDown Live will not continue until an apology is presented, Miz says.

A few minutes goes by without Renee Young entering, and The Miz is very upset. He says he can’t understand how Renee Young can sleep at night knowing she sacrificed her journalistic integrity in order to sleep with Dean Ambrose.

Dean Ambrose enters. He runs into the ring, and The Miz immediately retreats behind the ropes, with Maryse blocking Ambrose from getting to her husband. Maryse then slaps Ambrose across the face, and The Miz and Maryse both start to walk backstage. As they’re leaving, Ambrose says that Maryse hits way harder than The Miz does.

What follows is a preview of the show written earlier today:

John Cena returned to SmackDown Live last week after a two-month absence. He told the crowd in Chicago that he is far from finished and that he’s going after the World Championship title. He then challenged AJ Styles to a match at Royal Rumble, and the contract for that match will be signed this evening. This will be the first time Styles and Cena actually exchange words since Cena returned; last week, Cena simply entered at the conclusion of the show in order to shake Styles’ hand. What will they have to say to one another tonight?

Meanwhile, Dean Ambrose went after The Miz last week after The Miz insulted his real-life girlfriend Renee Young. Viewers will recall that the previous week, The Miz brought up Ambrose and Young’s off-camera relationship in an in-ring segment, which Young found to be extremely inappropriate and which led her to slap The Miz across the face. Now, Dean Ambrose will get to take on The Miz in a match with the Intercontinental Championship on the line.

Baron Corbin and Dolph Ziggler are also at each others’ throats, and both of them failed to defeat AJ Styles in a title match last week. Baron Corbin was close to pinning Dolph Ziggler, but at the last moment, AJ Styles came in and scored the victory. Now, Corbin will get a chance to potentially redeem himself. Finally, someone dressed up in a La Luchadora costume helped Alexa Bliss win in a match against Becky Lynch last week. Who was this mysterious person?

We may find that out tonight when SmackDown Live airs on the USA Network.