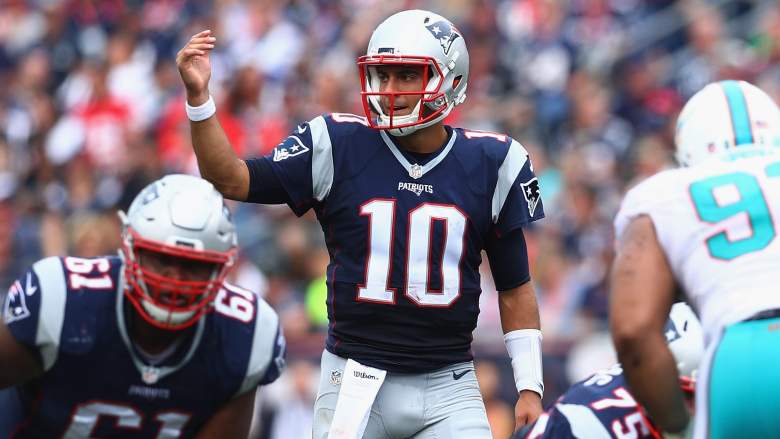 It took New England Patriots quarterback Jimmy Garoppolo just one-and-a-half games to prove his worth around the league.

When the 25-year-old Eastern Illinois product filled in for a suspended Tom Brady at the beginning of the year, he looked razor-sharp before suffering a shoulder injury in Week 2, completing 71.2 percent of his passes for 496 yards (8.41 per attempt), four touchdowns, zero interceptions and a 119.0 QB rating.

Now, as Garoppolo and the Pats prepare for Super Bowl LI, and as the rest of the organizations around the league dive into the offseason, rumors are beginning to swirl that several teams are interested in trading for Garoppolo.

The Houston Texans, who signed Brock Osweiler to a four-year, $72-milion deal in the offseason before ultimately benching him in the middle of the year, are a potential target, according to The Houston Chronicle‘s Aaron Wilson:

He’s talented enough that he’s emerged as a potential trade commodity for the Patriots and a possible target for quarterback-needy NFL teams, including the Texans.

The Patriots will obviously drive a hard bargain and hedge their bets with Garoppolo considering that the seemingly ageless Brady turns 40 next season. It could cost a first-round draft pick and change to get Garoppolo via a trade.

This wouldn’t be the first time the Texans have shown an interest in Garoppolo:

Asked Jimmy Garoppolo if he met with the Texans during the draft process:

"I met with them a ton actually"

The Cleveland Browns, according to The Cleveland Plain Dealer‘s Mary Kay Cabot, are another potential suitor:

Sources say the Browns’ interest in Garoppolo is real and that they’ll try to trade for him depending on how their draft evaluations go over the next five weeks or so.

If the Browns decide to draft Mitch Trubisky or Deshaun Watson in the first round, they’ll be much less likely to pursue the Patriots’ backup — but wouldn’t rule it out.

With the Browns ever-rotating roulette of starting quarterbacks, some pundits, such as Fox Sports’ Colin Cowherd, believe they should go hard after Garoppolo:

Trade half your draft picks if you have to. Go get Jimmy Garoppolo, Browns. pic.twitter.com/0rF4Cz9L2H

Finally in the Jimmy G Sweepstakes, there are the Chicago Bears. This report comes from CBS’ Jason La Canfora:

The Chicago Bears will make a strong, concerted effort to acquire quarterback Jimmy Garoppolo from the New England Patriots , according to sources with knowledge of the situation. The Illinois native is far and away their top offseason priority.

Though incumbent Jay Cutler has four more seasons on his deal, he’s coming off a medicore–albeit injury-riddled–campaign, and according to La Canfora, the Bears are ready to move on.

Ultimately, it’s uncertain if the Pats will even shop Garoppolo or what the asking price will be, but one thing is clear: No matter what happens on Super Bowl Sunday, it appears one of the savviest franchises in the league will have one of the most sought-after trade targets.

Read More
New England Patriots, NFL
Patriots backup QB Jimmy Garoppolo is set to be one of the most sought-after trade targets this offseason.