Kyrie Irving was trending on Twitter today because he believes the Earth is flat. I asked him about it. pic.twitter.com/ODe9aP9qmK

Kyrie Irving doesn’t really believe the earth is flat…right? Well, you can watch his interview above, and judge for yourself.

That wasn’t the least of it. The whole controversy began when Irving’s NBA teammates Channing Frye and Richard Jefferson recorded a podcast called Road Tripping with R.J. and Channing, Sports Illustrated reported.

They asked Irving to come on as a guest, which he did. At one point, Sports Illustrated reported, after Frye discussed aliens, Irving asked, “Do you think the Earth is round?” Frye and Jefferson sanely said, yes, the earth is round, but Irving said, according to SI:

This is not even a conspiracy theory. The Earth is flat.

You can listen to the podcast here:

What I’ve been taught is that the earth is round. But if you really think about it from a landscape of the way we travel, the way we move and the fact that, can you really think of us rotating around the sun and all planets aligned, rotating in specific dates, being perpendicular with what’s going on with these planets?

CBS News reported that Jefferson didn’t sound like he was buying the argument.

World-renowned geologist and former head of science at Duke University, Prof. Kyrie Irving, has confirmed that the earth is undoubtedly flat pic.twitter.com/9oF96Zp8vd

Im getting off twitter for the night, Kyrie Irving thinks the world is flat and Donald Glover is playing a part in the new Lion King, wow

Basketball Player Kyrie Irving declares the Earth is flat. Maybe, he thinks he is a Frisbee player? pic.twitter.com/fvLLNasUas 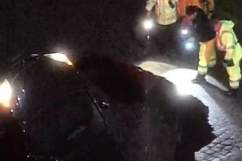