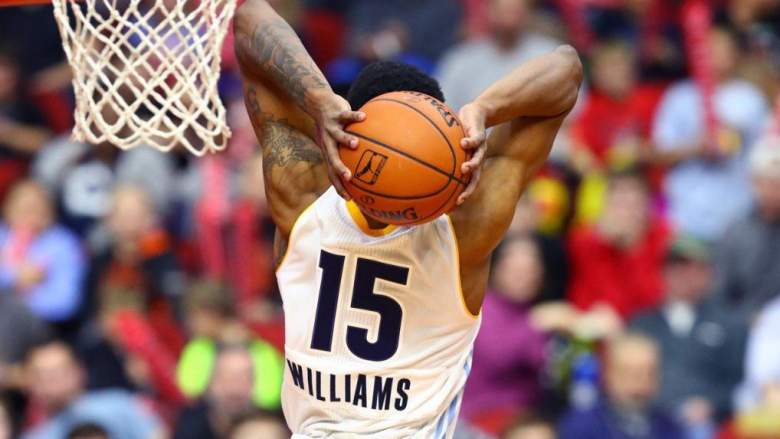 Troy Williams is one of six high-flyers at the 2017 D-League Dunk Contest. (Twitter)

Looking to watch a live stream of the 2017 D-League dunk contest? There are a couple of different ways to watch, even if you don’t have a cable subscription.

The six dunkers will compete in the preliminary round on Saturday starting at 12:30 p.m. ET, then the final round will air on NBA TV during halftime of the D-League All-Star Game, which tips at 2 p.m. ET.

Here’s a complete rundown of how to watch all the action online or on streaming devices:

The preliminary round, starting at 12:30 p.m. ET, will be streamed via Facebook live. You can watch on your desktop via the NBA D League’s Facebook, or you can watch on mobile and other streaming devices via the Facebook app.

The final round of the dunk contest will air on NBA TV during halftime of the D-League All-Star game (around 3 p.m. ET). Here’s how to watch a stream:

While NBA TV doesn’t provide a live stream, you can watch NBA TV coverage via Sling TV, an online streaming service that provides access to select channels for a monthly fee. Here’s how to sign up for a free 7-day trial:

4) Select the channel package or packages you want. You can choose either base package (Sling Orange or Sling Blue), but make sure to include the Sports Extra add-on, which includes NBA TV

5) Enter your payment information. Sling Orange costs $20 per month, and Sling Blue costs $25 per month, while the Sports Extra add-on is $5, but if you cancel your subscription within seven days of signing up, you will not be charged

If you have a Sling TV subscription (read above to learn how to start a free trial), you can watch NBA TV on mobile and other compatible devices via the Sling TV app, which is free to download in the following locations: