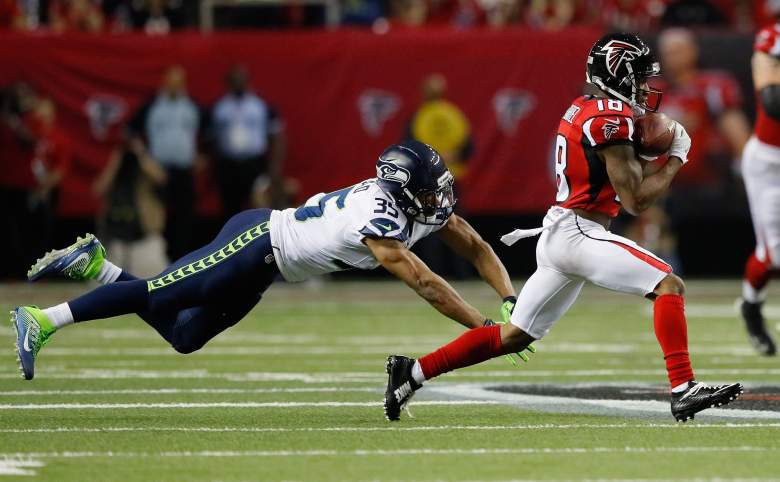 The Falcons’ Taylor Gabriel runs away from Seattle’s DeShawn Shead during the playoffs. (Getty)

It goes without saying, but the New England Patriots and Atlanta Falcons have done extraordinary things on the football field this season.

After all, the teams outlasted everyone else and will be facing each other in Super Bowl 2017 on Sunday in Houston.

They have a lot things in common. Explosive offenses? Check. Stud quarterbacks? Check. Standout special teams? Check. We can go on and on.

Another way we can compare them is by the teams they played this season. In fact, their schedules featured a handful of common opponents. Both the Patriots and Falcons faced the Arizona Cardinals, San Francisco 49ers, Los Angeles Rams, Seattle Seahawks and Denver Broncos. The Falcons actually played the Seahawks twice, including once in the playoffs.

Both New England and Atlanta pretty much rolled through those parts of their respective schedules. The Pats were 4-1 against that slate, the Falcons 5-1. Both losses came courtesy of the Seahawks in the regular season. Atlanta, though, got its revenge on Seattle in the postseason.

All teams in the AFC East (Patriots) and NFC South (Falcons) played against the NFC West (49ers, Cardinals, Seahawks, Rams) this season as was dictated by the rotating schedule. Atlanta played Denver as the NFC South also matched up against the AFC West (Broncos). And the Patriots faced the Broncos because of their division finishes in 2015 (they both won).

Here are the breakdowns of the Falcons and Patriots against common opponents this season:

Against the Arizona Cardinals

Against the Seattle Seahawks

Against the San Francisco 49ers

Against the Los Angeles Rams

Against the Denver Broncos

Read More
Atlanta Falcons, Football, New England Patriots, NFL, Super Bowl 2017
The Falcons and Patriots have had five common opponents this season. Keep reading here to find out how the Super Bowl teams stacked up against them.