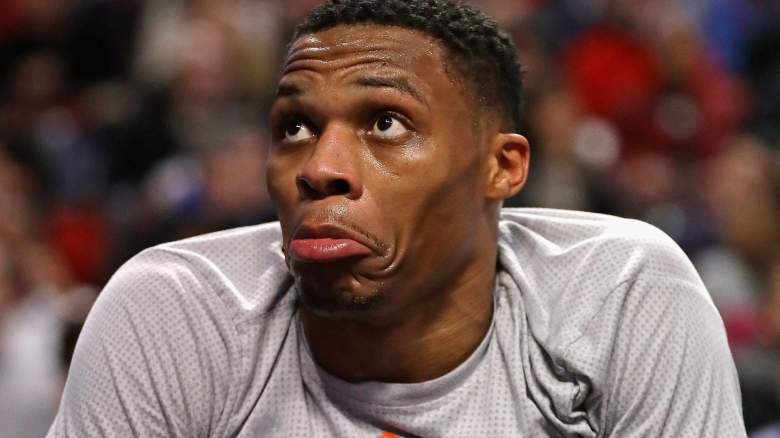 Averaging a triple-double throughout an entire NBA season has long been regarded as an impossible task.

No matter the numbers Russell Westbrook finishes the year with, it’s safe to say he has changed those beliefs.

Through 57 games, Russ — who is looking to become the first player since Oscar Robertson to average a triple-double — is averaging 31.1 points, 10.5 rebounds and 10.1 assists per game. Assuming he plays each of the Thunder’s remaining 25 games, he’ll need to put up 0.0 points (should be good there), 8.88 rebounds and 9.72 assists per contest over that stretch to finish with averages of at least 10, 10 and 10.

Interestingly enough for the explosive point guard, it’s likely to come down to assists. He gets a whopping 8.4 uncontested rebounds per game — the most in the NBA — and that’s not likely to change because when he gets defensive rebounds, it’s beneficial to the Thunder in that he gets into transition quicker.

As for assists, he’s averaging “only” 9.3 dimes since the start of the new year, and he’s without Enes Kanter, who was scoring on about 11 percent of Westbrook’s assists when he was healthy. Moreover, while Westbrook was averaging 10.23 assists and his teammates were shooting 51.2 percent on his passes in games that Kanter played, those numbers have dropped to 9.6 and 42.6, respectively, since Kanter left the lineup.

What Westbrook has working in his favor is the schedule. Of the Thunder’s 25 remaining games, 12 are against teams that rank in the Top 10 in the NBA in pace. Two games each against Denver and Phoenix alone will likely be worth significant statistical boosts.

Ultimately, there’s hardly any difference between 30, 10 and 10 or 30, 9.5 and 9.5, besides the fact the former has nice, round numbers. Whether or not Westbrook finishes the season averaging a triple-double, it’ll still be one of the most impressive statistical campaigns in NBA history.