The stolen jersey of New England Patriots’ star quarterback Tom Brady is worth $500,000, according to a Houston police report.

You can see the report above.

The police report says: “On 2/05/17, the City of Houston hosted Super Bowl LI in the NRG Stadium. Shortly after winning the game, New England Patriots quarterback Tom Brady noticed his game jersey missing from his locker in the Patriot’s designated locker room.”

Under property section, the report lists the jersey as being valued at $500,000. It says the police division handling the theft is “major offenders – police impersona/Swindle” and indicates that Brady’s height is 6 foot four inches and his weight is 225 pounds.

According to The Washington Post, New England Patriots owner Robert Kraft compared the theft to stealing “a great Chagall or Picasso.” In mid February, the Post reported that Brady sounded less hopeful about ever getting it back.

Texas Lt. Gov. Dan Patrick previously asked the Texas Rangers to assist the Houston Police Department in finding Tom Brady’s missing Super Bowl jersey, saying in a statement that it has historical value and was “stolen.” Patrick said the jersey has been called the “most valuable NFL collectable ever.”

This is what Brady told members of the media after the jersey first disappeared: “I put it in my bag and then came out and it wasn’t there anymore, so it’s unfortunate because that’s a nice piece of memorabilia. So if it shows up on eBay somewhere, someone let me know, try to track that down.” 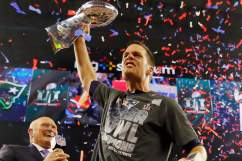 Was Tom Brady’s Super Bowl Jersey Stolen? Did He Find It?