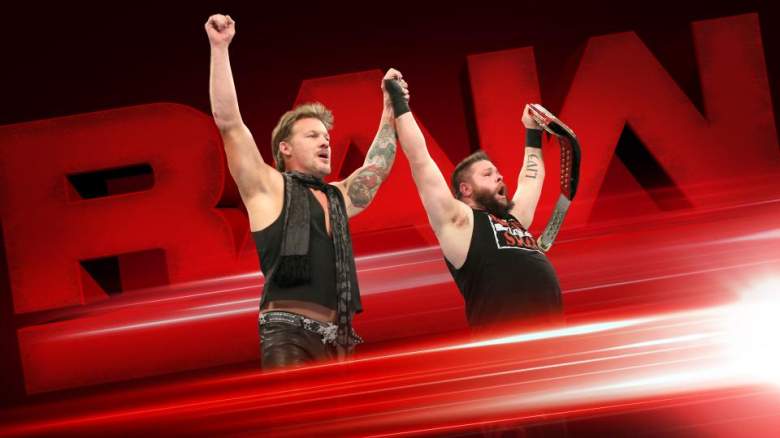 Tonight on Monday Night Raw, Chris Jericho and Kevin Owens will hold what they’re referring to as a “Festival of Friendship.” This comes six months into a storyline involving the alliance between Jericho and Owens, and as it turns out, the plot got started mainly because Vince McMahon liked Jericho and Owens’ improv skills.

That’s according to a recent episode of Chris Jericho’s podcast Talk is Jericho, during which Jericho and Owens discuss the origin of their best friends angle. As they explain, it all started with an episode of SmackDown that aired on April 21st, 2016. During this show, Kevin Owens and Chris Jericho fought against Sami Zayn and Dean Ambrose in a tag team match. This was meant to be a preview of the forthcoming Payback pay-per-view, during which Kevin Owens would be facing Sami Zayn and Chris Jericho would be facing Dean Ambrose.

As Kevin Owens explains on Talk is Jericho, the plan for the end of that SmackDown match was for Chris Jericho to attack Dean Ambrose, thus giving Kevin Owens the opportunity to get the pin. Vince McMahon told Owens that at the end of the match, he should celebrate like crazy as if this was a solo venture; the joke would be that Owens would be going nuts and taking all the credit for a victory that can mostly be attributed to Chris Jericho.

“Vince was very specific before,” Owens explains on Talk Is Jericho. “He was like, ‘Well, when Chris pushes Ambrose and you get the victory, you act like it’s all you…it’s a huge moment for you, like you just won the Stanley Cup.'”

Sure enough, at the end of SmackDown, Owens celebrated as if it was the greatest moment of his entire life, and because Chris Jericho was nearby, Owens improvised a moment where he jumps right into Jericho’s arms, and the two of them hug. They then walk backstage together, and Kevin Owens yells, “I beat you! I beat you! Chris helped, but I beat you!”

According to Kevin Owens, the two of them walked backstage to find Vince McMahon howling with laughter. The idea that Owens and Jericho make for a funny team originated with this episode of SmackDown, although the actual best friends storyline wouldn’t begin for a few more months.

The next major development in the Owens and Jericho plot came on the May 30th episode of Monday Night Raw. At the time, the Money in the Bank pay-per-view was being promoted; Dean Ambrose, Alberto Del Rio, Cesaro, Chris Jericho, Kevin Owens, and Sami Zayn were scheduled to compete in a ladder match at that show. So during the main event of May 30th’s Raw, the participants of the ladder match fought against one another, with Dean Ambrose, Cesaro and Sami Zayn going up against Kevin Owens, Chris Jericho and Alberto Del Rio.

In a backstage segment before the Raw match, Owens, Jericho and Del Rio argue while trying to formulate a plan. Jericho casually mentions that he doesn’t like Kevin Owens, which prompts Owens to respond with, “I thought we had a thing going!” The two of them then riff for a bit, and the segment ends with Chris Jericho telling Kevin Owens to “watch it.” Owens responds, “Watch what?” Jericho replies, “It.”

This is the segment where Jericho’s “it” bit was born, and and so this Raw not only birthed a classic Jericho meme, but it also once again showed Vince McMahon how great a pair these two are.

Owens and Jericho would continue to sporadically improvise with one another in backstage segments over the next few weeks. Flashforward to early August, when Chris Jericho was feuding with Enzo Amore and Big Cass. Jericho needed to compensate for the fact that Enzo Amore has Big Cass beside him, whereas Jericho is not part of a tag team. And so on the August 1st broadcast, in an interview with Tom Phillips, Jericho suddenly claims that he has someone to watch his back.

Tom then asks Jericho who he’s talking about, and Jericho is thrown off, clearly not expecting a followup question. Jericho obviously didn’t really have anyone in mind, and so he makes up a name on the spot, saying that the person who has his back is “Jim…Jimmin…Jimmin Marvin Luder.” Jericho has to come up with a whole backstory about who Jimmin Marvin Luder is, but he’s interrupted by Kevin Owens, who enters and tells Chris, “I got your back.”

On the following week’s Raw, Jericho suddenly declares in a segment with Enzo Amore and Big Cass that he and Kevin Owens have become best friends. Apparently, in the seven days since the last show, the two of them suddenly formed a lifelong bond.

“Owens and I had a lot of problems when he first came here to the WWE, but last week I spoke to the great Jimmin Marvin Luder, and he gave me some advice that I took, and now Kevin and I are closer than brothers,” Jericho says.

And just like that, a throwaway comedic moment in a backstage segment birthed a major WWE storyline that has been driving Monday Night Raw for the past six months. Jericho and Owens would go on to team up against Enzo Amore and Big Cass in a tag team match at SummerSlam. And once Kevin Owens became Universal Champion, Jericho would proceed to interfere in virtually every single one of Jericho’s title defenses. It got to the point where Jericho had to be suspended in a shark cage at Royal Rumble so that he would not interfere anymore, although he somehow still managed to sneak some brass knuckles up there so he could toss them down to Owens at a key moment.

Throughout this storyline, we have on a few occasions seen cracks in the friendship, especially when Chris Jericho seemed to set his sights on Kevin Owens’ Universal Championship title by competing in the Royal Rumble match. Clearly, this is leading to some sort of major confrontation between the two, but for now, Chris Jericho and Kevin Owens remain as close as ever.