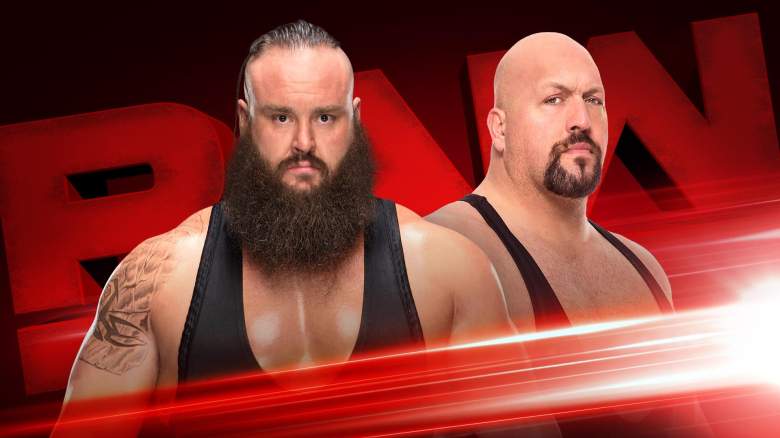 Monday Night Raw is currently airing a new episode live on the USA Network. Here’s what has happened so far:

10:59 – Braun Strowman defeats Big Show. After the match ends, Roman Reigns enters and attacks Strowman, but Strowman is able to retaliate, delivering a powerslam and standing victorious as the show closes.

10:52 – During an interview with Michael Cole, Paul Heyman says that if Goldberg wins at Fastlane and heads into WrestleMania as Universal Champion, this championship will just be another thing that Brock Lesnar conquers at WrestleMania.

10:48 – Backstage, Stephanie McMahon asks Mick Foley why he didn’t back her up earlier tonight. Foley says that he supports Bayley. Stephanie says that Foley is starting to push things too far and he needs to stop undermining her. Foley says that he refuses to let her intimidate him and prevent him from defending what he knows is right. Stephanie tells Foley to watch his step on the way out because she wouldn’t want him to have an accident.

10:42 – Kevin Owens defeats Sami Zayn in a match that lasts about a minute.

10:37 – Kevin Owens and Sami Zayn are scheduled to have a match. But as Zayn is making his way to the ring, he’s attacked from behind by Samoa Joe. A very injured Sami Zayn is tossed into the ring, and his match against Kevin Owens begins.

10:31 – In a backstage interview, Sami Zayn says that he saw Kevin Owens’ betrayal coming. Like Samoa Joe, Kevin Owens is a terribly selfish person, Zayn says. But eventually, time catches up to the Samoa Joes and Kevin Owenses of the world, Zayn says.

10:18 – Sasha Banks defeats Charlotte by submission. Dana Brooke tries to interfere in the match, but Bayley stops her, attacking her from behind as she’s running out to the ring.

10:00 – Bayley enters. The crowd chants “You deserve it!” Bayley says that she finally realized her lifelong dream last week.

Stephanie McMahon enters. She asks Bayley if she imagined as a kid winning her championship by having her friend interfere, and she calls Bayley’s victory tainted. Stephanie says that Bayley should relinquish her championship.

Sasha Banks enters. Stephanie asks why Bayley can’t do anything without Sasha getting involved. Sasha tells Bayley not to listen to this, saying that she won the title fair and square. But Bayley says that Stephanie is right and that the Women’s Championship is bigger than her. She acts like she’s going to give up the title, only to pull a swerve and say that there’s no way in hell she’s giving it up because she beat Charlotte three times and she earned it.

Charlotte enters. She says she wants to apologize on behalf of the entire women’s division because of the behavior of Bayley and Sasha. Charlotte says that there’s no need for Bayley to give up the title because she’s going to take it back at Fastlane. Sasha asks Charlotte to shut up, and the two of them begin to argue before eventually deciding that they will face one another in a match tonight. Stephanie McMahon chimes in and books the match.

9:49 – Nia Jax defeats a local jobber. After the match, Nia says in an interview that it’s outrageous she hasn’t had a shot at the Raw Women’s Championship yet. She also says that she’s officially putting the champion, Bayley, on notice.

9:37 – Jack Gallagher and Neville participate in a contract signing. Neville wants to just sign and get it over with, but Gallagher wants them to share some tea and biscuits. Neville says Jack is exactly what dumb Americans expect British people to be; it’s embarrassing and Jack should be ashamed of himself, Neville says. Gallagher says he isn’t “playing” a gentleman; he is a gentleman. Neville’s problem is that he believes he’s a king and that he’s better than everyone else, Gallagher says. The two then begin to brawl, with Neville being forced to retreat.

9:16 – The New Day enter and discuss the fact that they will be hosting WrestleMania this year. They also say that even though the blueprints to their ice cream machine were torn up last week, they were able to reconstruct them from memory, and now they have the blueprints on an iPad (which Kofi Kingston is holding). Lana holds up an iPad of her own, on which she has the plans to the ice cream machine. Xavier Woods and Kofi Kingston can’t figure out how she has them, to which Big E replies, “You know she’s Russian, right?”

8:58 – Luke Gallows and Karl Anderson defeat Roman Reigns by disqualification. But they continue to brawl after the bell rings, and the segment ends with Reigns standing victorious after spearing Karl Anderson.

8:53 – Backstage, Brian Kendrick says that he was trying to teach Akira Tozawa a lesson in respect.

8:48 – Brian Kendrick is set to fight Akira Tozawa. Before the match, Tozawa won’t shake Kendrick’s hand, and so Kendrick attacks him and walks off before the match can even take place.

8:43 – Roman Reigns enters Mick Foley’s office. He wants Braun Strowman, but Foley says Strowman is busy tonight. Luke Gallows and Karl Anderson enter; they tell Roman that they have unfinished business, and they should finish that business in a match tonight. Foley says he’ll book the match if Roman finds a partner, but Roman says there’s no need for a partner and he’ll fight them on his own.

8:35 – Backstage, Mick Foley catches up with Kevin Owens, who says he’s leaving for the night. Foley says Owens can’t leave because he has a match against Sami Zayn tonight. Owens is surprised by this, saying that he thought Foley liked Zayn.

8:20 – Enzo Amore and Big Cass defeat Cesaro and Sheamus. This means they will face Luke Gallows and Karl Anderson at Fastlane. After the match, Enzo Amore grabs the microphone and starts gloating, and Sheamus kicks him right in the face.

8:00 – After a recap of last week’s Festival of Friendship segment, the show opens with Kevin Owens sitting in the ring. He says that the spotlight is finally solely where it belongs: on him. He says that he never believed the hype surrounding Goldberg, even when he was a kid watching WCW. When Goldbeg defeated Brock Lesnar in less than two minutes, he simply got lucky, but at Fastlane, Owens knows exactly what to do: all he has to do is outlast Goldberg, Owens says. He adds that he’s waiting his whole life to be a WWE champion, and now there’s nothing he will not do to keep it that way. Also, Owens says that while Goldberg has these delusions of being a supehero to kids around the world, Owens is going to prove at Fastlane that superheroes don’t exist.

Owens then is about to start talking about Chris Jericho, saying, “Now, as far as Chris Jericho goes…” but he just drops the microphone and walks off.