Many people anticipated Christian McCaffrey’s NFL Combine performance given the questions surrounding how well his game translates to the NFL. McCaffrey ran a 4.49 in his first attempt and followed it up with a much worse performance of 4.59 in his second attempt. The times are unofficial until the NFL releases the official numbers after the workout.

It was a strong performance from McCaffrey who also did well in the vertical and broad jump.

Christian McCaffrey posted a 37.5-inch vertical and 10-foot-1-inch broad jump at the combine.

McCaffrey has the potential to give an NFL team versatility given he can be involved in the run and pass game in addition to special teams. He was timed in college and ran a 4.5 seconds 40. His Combine performance was slightly better which is a good sign given players often run slower at the Combine when compared to their college time.

Heavy has McCaffrey going to the Raiders with the 24th pick in our latest mock draft.

McCaffrey put up gaudy numbers in college but for whatever reason he is one of the most scrutinized players in this draft class. His junior year he rushed for 1,603 yards and 13 touchdowns. He also had 310 receiving yards and three touchdowns.

McCaffrey told The Mercury News that the doubters add a bit of motivation for him to do well at the next level.

McCaffrey did not fare so well in the bench press drill. He did 10 reps of 225 pounds, a much lower number than some of the other top running backs.

When you run the 40 your face goes funny pic.twitter.com/sMRiDqUXuq 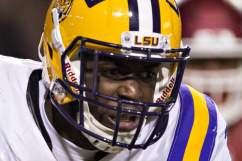